Reader Toby Doig nearly had a heart attack this morning when he visited Datek to check out his share portfolio and found that the Dow Jones Industrial Average (DJIA) had taken the full brunt of the stock market wobble and slumped just over 10,000 points to stand at 0.20 (down 99.999 per cent, roughly).

Fortunately for Toby and budding Gordon Geckos everywhere, the DJIA hadn't gone the toilet but clearly there had been a terrible computing error someone along the line. Surprisingly, no one seems too keen on telling us where.

Once Toby has caught his heart with his left hand as it shot out his chest, he screen-grabbed the page and set it over to us. And here she is (beautifully sliced). ® 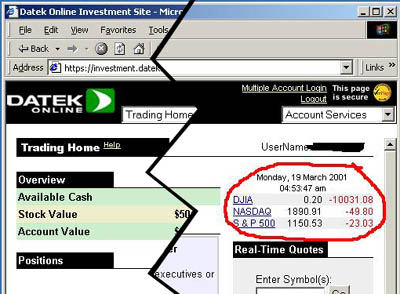