Casio is to ship its Linux-based, Transmeta-powered Cassiopeia Fiva sub-notebook on 21 November.

The Fiva MPC-216XL contains a 600MHz Crusoe TM5600 processor. Its operating system comes from Transmeta too - it's Midori Linux, the OS distribution the chip maker began developing early on (under the name Mobile Linux) and released to the open source world as Midori in March this year. 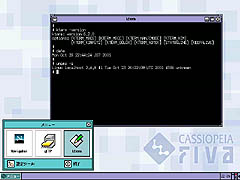 Alas Casio is concerned that there isn't sufficient demand for a Linux-based sub-notebook in Japan, so it's bundling Windows XP Home Edition too. Interestingly, though, users select which operating system they want to boot into by toggling a physical "Change Over" switch in the Fiva's body. Flip it to A Mode and you get XP; set it to B Mode and you get Linux.

The notebook sports built-in 100Mbps Ethernet, 56Kbps modem, USB and IEEE 1394 ports. There's an external monitor connector, too, and the built-in LCD is an 8.4in 800x600 TFT model. There is a CompactFlash card slot, plus a CardBus port.