A Silicon Valley funeral for Be Inc

In the movies, it always rains at funerals. In Silicon Valley yesterday, Be Inc held its liquidation auction and although not a drop fell from the heavens, it was fucking cold. 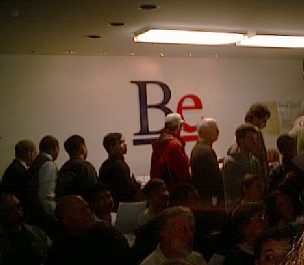 But that didn't lessen the sense of occasion, as the most romantic of all Silicon Valley start-ups finally ran into the auctioneer's hammer. The big freeze didn't stop several hundred geeks, gawkers, dreamers and vultures (where else could I be?) from attending to pick over the bones.

Auctions aren't so much funerals as autopsies, where you really do get to rummage through the personal bric-a-brac.

And there it was: from the cubicle partitions and the trade-show props to the coffee machine. Or as the liquidator's catalog described it, a "coffee machine with supplies".

You could bid for the Be company shredder, too. While most shredders take one sheet at a time, this one could take five sheets in one go, or as the auctioneer put it, "it's the Richard Nixon Model!" (The "Arthur Andersen model" might have been more topical.)

So more bodies were crammed into the upper floor of Be's Menlo Park premises than safety limits allow, and a collection of former staffers, recent and distant were arriving by the minute.

"Benoit's here!," called out the receptionist.

You see, the Be liquidation wasn't any old auction. The great Be adventure deservedly makes geeks go misty-eyed with sentiment, for a couple of very big reasons.

For a start, it set out to do what we now know is impossible: create a great personal computer operating system from scratch. Be created the "media OS", or "the Mac for Intel", or even the "poor man's SGI" with such elegance and style that even burned-out losers of previous OS wars, like the author, were converted. And we think today exactly what we thought we first used BeOS. Firstly, hey - this is pretty neat…. Then, this is really great, and really quite useful. And forever after... how did they make Windows/Linux/MacOS/[your OS here] suck so much? Why is this computer so slow? Can I have a real file system, please?

When you've done Be, you can't ever really go back.

(And then only under extreme duress, back to a "hyper-competitive and fast-moving Microsoft".)

Secondly, and it's ironic when the assets go under a hammer, is the fact that Be Inc kept trading for quite so long. Investors sunk over $100 million into the company over a decade, but it never showed more than $3 million in annual revenues. And yet so great was the promise, investors kept returning, until the Microsoft squeeze became intolerable, that Be had to run for the niche appliance market.

BeOS may well have been designed to become the successor to MacOS (only to find itself outbid when the moment came), but otherwise it played its hand brilliantly. After being spurned by Apple, and thrown off the PPC platform, Be styled itself as the alternative to a dual-boot Windows. Gassee was fond of pointing out that a PC could reboot into BeOS in less time than it took to launch Internet Explorer from a standing start. And Be had won the mindshare of the audio community, shortly before the shift into the appliance niche, which is remarkable considering how conservative that market is. 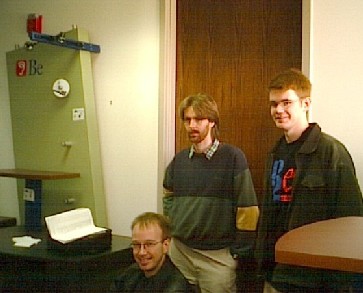 We're not in that "creative" demographic, but by release 5.0 BeOS was useful enough to get through a working day without a hiccup, and without any of the ballsache that's required to say, get a scanner working under Linux, or get a CD burned under Windows XP. And if we got bored we could, as we gushed to Marco Niellsen [pictured here, with former ex-Be staff] start up 23 instances of Ennio Morricone's 'Once Upon A Time In The West' in MP3 format, play them all simultaneously at different speeds, and broadcast over the internet with one click. Just for the hell of it.

Afternoon engagements called us, and we never got the chance to bid for the 29 Be mugs, the lot of a hundred Be T-shirts (we'd dearly one of either - will swap), or the iMac we'd promised shacker. Let alone the BeBoxes. Or, gasp! the Hobbit prototypes which preceded the PPC BeBox.

Cruelly the only assets of real value - BeOS itself and the staff - now belong to Palm, possibly the stupidest technology company on Earth.

You can mourn and catalog the injustices, but like counting sheep you'll fall asleep before you've reached double figures. We'll add one more irony: the Be liquidation took place on the day we revealed that SGI had transferred a big chunk of its 3D graphics portfolio to Microsoft.