Hands on with the PDA-killer Sony P800

A contender, we reckon

Handspring's fine Treo communicator had Walt Mossberg of the Wall Street Journal hyperventilating recently, with Walt describing it as the best phone and the best PDA he'd ever used. It probably is.

But when Walt gets to see the Sony Ericsson P800, we recommend that the demonstrators bring along a team of paramedics. Although the Treo and the P800 are functionally similar, our first impressions of the new Ericsonny device leave the Treo looking like Dilbert's secret Elbonian recipe for mud (that's soil and water, by the way). 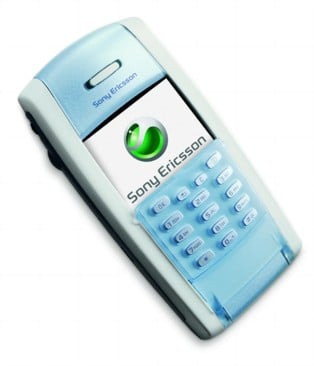 It's far from perfect, but after several years of looking at smartphones, the P800 has the kind of potential to break out of the geek ghetto, and one that leaves us even more convinced that today's PDAs need to evolve dramatically, and fast. For years they've been a secure little niche: PDAs and have even been fashionable, usually during consumer booms when material excess was in vogue: think of Psion's Organizer in the 80s, and Palm in the late 90s. But the total volume of these units shipped remains miniscule compared to phones.

By way of comparison, one in nine people uses a cellphone, according to the GSM Association. Manufacturers are betting that most smartphones will simply be modelled on today's devices with numeric keypads, and a larger screen: both Nokia's Series 60 UI and The Beast's Smartphone 2002 follow this form factor.

But the P800 - like the Motorola Accompli 008 is a true pen input PDA that is unmistakeably a phone. Phones have now shrunk beyond the point of convenience: I'm using a Motorola V.66 and it's a fine phone, but really too small to be comfortable with. It gets lost in my deep trouser pockets, and the keypad buttons are pretty fiddly. Sony/Ericsson isn't the first phone that grafts PDA functionality into the device without compromising the low mass of a real phone - that goes to last year's Accompli - but it is the richest: a far more capable color device, that just happens to include a camera too.

It's very light. The blue translucent styling is strongly reminiscent of the original iMac, and this is matched by the user interface effects: click on an icon and it wooshes a little like the Aqua genie. Like Ericsson's well received T68 phone, it's supports color schemes. 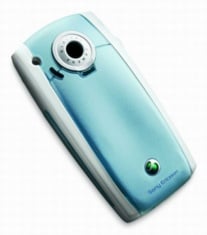 The P800 resembles its Symbian predecessor, the R380, sporting an LCD that takes up much of the front of the device, with a flip down keypad that mechanically touches the LCD. The camera is built into the back, but unlike Nokia's 7650 camera phone, there's no lens cover, which could leave the device vulnerable to dirt and dust (or in my case, stray tobacco).

In a nice touch, when you take a picture, the phone gives you audio feedback in the form of a 1958 Leica shutter.

There's no USB connector, but we're told that the Ericsson texting pad - a tiny Alphanumeric keyboard - will work with the device. A combination bluetooth and infra red port is on the left of the device, along with a rocker wheel, and a thin plectrum of a stylus slots uncomfortably onto the right. This is fiddly and will hopefully be fixed when the device goes on sale in the fall. It's the weakest design feature of the phone. On the right side you'll also find the camera button, and a blue button that "connects you directly to the Internet". Strange for an always-on device: we figure this means that when you're out of range of a GPRS cell, it makes a regular GSM call on your behalf.

The user interface makes for the most interesting comparisons with rivals, however.

It's running on a 320x208 display, which feels cramped compared to PocketPC PDAs but is luxurious compared to PalmOS devices. In terms of UI metaphors, it very closely resembles the Palm UI, applications overlay each other, but with the addition of a tabbed navigation strip at the top of the screen. You can view as icon, or a list view. 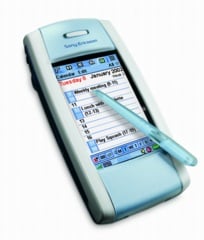 Perfecting this UI has been a long and painful process with Ericsson canning projects that used a bulkier 320x240 version. The UI originated at Ronneby in Sweden, in a lab which was spun off into the Symbian operation, and it was formerly announced two years ago as "Quartz". But it's been worth the wait, we reckon. This is a slimmer version of Quartz, called UIQ and gains enormously from the higher pixel density that's now possible. (Both the fatter and the thinner versions of UIQ are available to licensees).

"We had to make it smaller," Ulf Wretling Sony Ericsson's head of third-party programs told us. "Asian consumers are picky on size as well as style, while US consumers are more used to bigger devices, and look for functionality."

The device uses Ericsson's own AU System Browser, which can handle real HTML, cHTML or WAP 2.0 pages, so you don't have to carry two browsers into the shower. There's also been some effort to make download Java midlets easier, with a built-ion AppLoader fetching them directly from the server.

With a huge amount of software rolling out for Symbian phones (Nokia, Motorola, Siemens and Panasonic all have devices in the pipeline), we'd like to see installing apps made as easy: it's absurd, with the Nokia 9210, to be required to use a PC for software installation. Devices should bootstrap themselves.

It's a triband device, so it will work on US networks, and the camera will allow you to store 200 pictures in VGA format. (The screen supports 4,096 colors).

In conclusion, it's probably the most desirable little piece of technology we've seen for a while. It certainly obliges Handspring and Danger to price their Treo and HipTop smartphones low, as the Ericsson is from the outset a much more capable device. But we hope there's room in the market for all three. 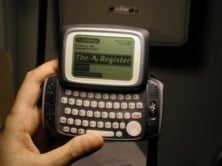 Earlier this year we called in on Danger's University Avenue HQ in Palo Alto, and thanks to the splendid Joe Palmer - hardware chief for the HipTop, and designer of the original BeBox - were able to snap a prototype HipTop running your favorite tech news site. 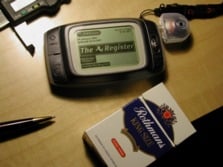 Alas we couldn't provide you with a size comparison of the P800. We'd run out of cigarettes. ®