The patriotic scam goes on

According to a story by the Boston Globe, the security firm which conducted the tests was unable to calibrate the equipment without running into one of two rather serious problems. When it's set to a sensitive level, it 'catches' world + dog. When it's set to a looser level, pretty much any idiot can escape detection by tilting his head or wearing eyeglasses.

According to the outside reviewer, difficulties with the kit proved exasperating and literally exhausting for airport staff.

Nevertheless, Identix CEO 'Doctor' Joseph Atick insists that his photographic Ouija board will defeat the Forces of Evil and protect all the world's innocent, sleeping children.

''Maybe every 20 minutes you'd have to look at the screen,'' the Globe quotes Atick as saying. ''Is that a lot of labor for enhancing the security at America's airports? I think the American people would disagree.''

Well of course the American people are largely unaware of what a monumental fraud face-recognition is when applied to crowd surveillance. As we've reported numerous times in the past, it simply does not work as advertised, and it can't. 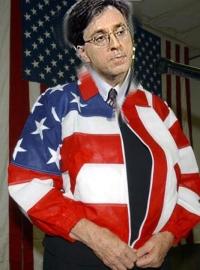 Most revolting, however, is the way Atick continues to enrobe himself in the Stars and Stripes, as if selling technological snake-oil with a cheap, patriotic war-on-terror veneer somehow makes it less fraudulent than it otherwise would be.

Speaking of a Senate measure called the Enhanced Border Security and Visa Reform Act (in conference committee), out of which Identix hopes to make a killing, the patriotic Atick says, "We are strongly encouraged by the Senate passage of this key piece of legislation and the impact it will have on homeland security. By requiring travel documents to include biometrics identifiers, such as fingerprint and face recognition, Congress has put forth the mechanism by which we can identify those who pose a threat to public safety while ensuring that the honest majority can travel unencumbered."

Back in October 2001, when the atrocity in New York was still horribly fresh in everyone's mind, CNN set up a chat-room meeting for Atick, in which the moderator passed him a few carefully-filtered softball questions from the public. Among them was the inevitable solicitation of Atick's view on whether his magic gear might have prevented the catastrophe.

"At least three [hijackers] were already known," he replies. "Two were being sought after since August 21, and the third, we found out that the French knew about him and had warned us. We will know more about the rest of the group, but I want to re-emphasize that terror is not faceless. If they're using individuals not known to anyone around the world, then there's nothing we can do, but since some of these were known, I can't help but imagine that we could have identified and intercepted at least some of these."

This is not unlike like the drivel of Identix competitor Viisage, which also sells dysfunctional face-recognition gear to airports and strapped law-enforcement organizations: "Face recognition is one of the ways to enhance our capabilities in identifying potential terrorists, and gives airport, border, customs and law enforcement officials another weapon in the fight against terrorism."

Of course, if it actually worked then maybe it would. ®