Update Anyone fancy an HP iPAQ H1910 for under a tenner? 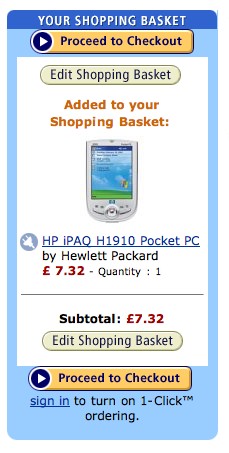 That's all Amazon.co.uk is asking for this 64MB, 200MHz Pocket PC? The e-tailer wants just £7.32 (plus postage and packing) for the device.

The H1910 isn't exactly a top-end model, but since the typical sale price is £290, we reckon Amazon has a bit of a bargain on its hands.

But grab it quickly before their Webmasters spot the error - assuming they get their checkout system up and running again. Come midday, we couldn't sign in - perhaps we were prevented by punters dashing to get their hands on ultra-cheap HP PDAs.

In any case, will the company honour the low price? In the US, the answer's no. Amazon recently won a test case brought by a consumer after the company refused to accept just $99.99 for a $1049.99 TV set.

The judge ruled that since the plaintiff's credit card had not been billed, no contract existed between the consumer and Amazon, so the company could not be forced to sell the TV for the incorrect price. Amazon doesn't bill credit cards until ordered goods ship - by which time it had spotted its mistake.

Amazon has yet to comment on the debacle. However, the BBC has reported that at least one buyer was told by an Amazon customer service representative that the price would stand.

No legal recourse for buyers as Amazon rejects £7 iPaq pricing