Toshiba has launched a 17in notebook into the European market in a bid to catch up with Apple's technology lead.

The Satellite P20 series (in the US it's the P25 series) is - surprise, surprise - aimed at the desktop replacement market. Models within the series are based on the Pentium 4 processor, clocked at up to 3.06GHz and running an 800MHz effective bit rate frontside bus. 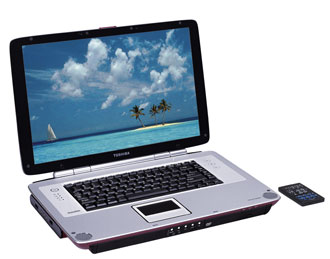 Every machine, says Tosh, has "DVD-burning capabilities" thanks to DVD-RAM and DVD-R/RW drives. The company has "added desktop publishing on a big, widescreen ratio display" to the list of applications its machines are suitable for. Thanks to the HyperThreading-enabled CPU, the notebook is ideal for "making your own music". There are even built-in Harmon Kardon speakers. If that's not signaling Tosh is after Apple, we don't know what is.

But what of the display itself? It's a 1440x900 - just like the 17in PowerBook. The Toshiba's screen is powered by an Nvidia GeForce FX Go 5200 graphics with 64MB of dedicated DDR video memory (though the web site says 32MB), which is, it has to be said, rather better than the PowerBook's GeForce 4 440 Go chip.

We'd say the Tosh isn't as stylish, either, but we're sure some of folk will prefer the P20's looks over the aluminium PowerBook's.