Sinn Fein has run into a blizzard of criticism for selling a "seditious" t-shirt on its new online store. 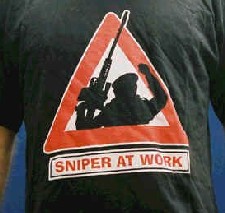 The Sniper at Work t-shirt celebrates "the famous South Armagh road sign" installed by the IRA as a photo opportunity for the newspapers during the Troubles. At €15 it's a snip.

The Ulster Unionist Party has slammed the t-shirt, calling for Sinn Fein's site to be "removed from the Web". The party has lodged a formal complaint with Northern Ireland's Chief Constable on "grounds of sedition".

In a statement, senior Ulster Unionist David McNarry said: "We need an urgent explanation from the Sinn Fein leadership. Who sanctioned the selling of these t-shirts in their on-line shop and furthermore does this imagery mean that Sinn Fein are proud and endorse the actions of these IRA snipers?"

The UUP also has an online shop, but aside from a tie, the merchandise consists of printed matter about matters political, and a video history of the party (What, no Lambeg drums? - Ed). Perhaps it could take some lessons from Sinn Fein over presentation and product selection, Sniper t-shirts, Rebel drone CDs and all the books excepted.

Or maybe the UUP could take a leaf from the book of ProdShopping. This Web site, alas "disappeared" following - if memory serves us correctly - threats to its author, was both a pastiche of the decidedly devout CatholicShopper.com and a satire of Northern Irish Protestant attitudes.

One product that took our fancy when we reviewed the site last year was Protestant holy water, collected from the Boyne and blessed by the Protestant Pope Rev. Ian Paisley. This is claimed to have amazing healing powers. Indeed, "if you have been out all night throwing bricks at the Fenians, and the PSNI, over the peace line in North Belfast this Holy Water is ideal to help heal those cuts and bruises." ®

Sons of Ulster join e-commerce revolution
Real IRA gets into computer piracy
Amazon drops link to Real IRA fund raiser
And the Patron Saint of the Internet is...