Astronomers have identified a massive comet-like structure - spanning a whopping three million light years - that is tearing through a distant galaxy cluster at more than 750 kilometres a second.

Yes, you read that right. A great ball of fiery gas*, some five thousand million times the size of the solar system. Fortunately, it isn't anywhere near Earth. The flaming gas-ball is in the Abell 3266 galaxy cluster, even more millions of light years away from us than it is across. 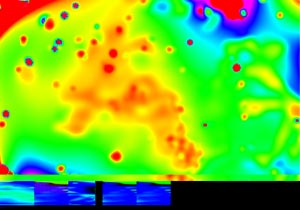 The fireball, which is the largest object of this kind ever identified, was spotted by stargazers using the European Space Agency's XMM-Newton X-Ray telescope.

The researchers have produced an entropy map of the gas-ball, which allows them to pick out the relatively cold dense gas of the comet from the hotter gas of the galaxy cluster. Analysis of the data has revealed remarkable detail of the stripping of gas from the comet's core, ESA says, at a rate of about a Sun's mass, every hour.

The scientists who discovered the object describe it as "truly fantastic".

"In Abell 3266 we are seeing structure formation in action," said Professor Mark Henriksen, co-author of the results. "Dark matter is the gravitational glue holding the gas ball together. But as it races through the galaxy cluster, a tug-of-war ensues where the galaxy cluster eventually wins, stripping off and dispersing gas that perhaps one day will seed star and galaxy growth within the cluster."

Zurich-based researcher Dr. Francesco Miniati commented: "What interests astronomers is not just the size of the gas ball but the role it plays in the formation and evolution of structure in the universe." ®

*Please take note that considerable restraint has been exercised, and no references to 'great balls of fire' have been made in this article.