Reg Review Asus launched its MyPal A620 PDA on the back of Microsoft's summer launch of Windows Mobile 2003 for Pocket PC. Wireless connectivity was one of the key improvements the software giant made with the new version of its operating system, but without a built-in radio the A620 wasn't best able to demonstrate those communications enhancements. 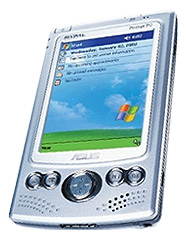 Taking that criticism on board, Asus is now offering the A620BT, which adds Bluetooth to the A620 hardware. Almost no other specifications have been changed. Like its wireless-free sibling, the A620BT contains 64MB of SDRAM, of which 55.2MB is available to users. The new model includes 64MB of Flash ROM, double the A620's 32MB. The PDA's screen is the Pocket PC standard: 3.5in, 240 x 320 pixels, 16-bit colour.

The most compact Compact Flash device?
Asus describes the A620BT as the world's thinnest and lightest Compact Flash-supporting Pocket PC. It weighs 141g (5oz) and is 1.3cm (0.5in) thick. That certainly compares well with Dell's Axim X5, which weighs in at 196g (6.9oz) and is 1.8cm (0.7in) front to back. Indeed, the X5 is bigger all round.

The A620BT's size puts it more on a par with devices that offer SD Card expansion, but it's by no means the thinnest or lightest Pocket PC we've seen. The Viewsonic V35, for example, is just 1cm (0.4in) thick and weighs 119g (4.2oz), and there are others of comparable weight and size.

The A620BT's CF slot is mounted into top of the device, between the stylus bay and the 3.5mm headphone socket. Remove the slot protection module and you can slide in memory cards. For bulkier adaptors, there's a panel on the back of the PDA that comes off to make room for GPS battery packs and so on.

Incidentally, the cradle is engineered for the PDA to fit tightly and precisely, ensuring a good connection and making it impossible to accidentally knock the A620BT off the cradle. The downside is that it requires two hands - one holding the PDA, the other the cradle - to remove it. The cradle hasn't been designed for folks who need to get away from their desks quickly.

Because the CF slot takes up so much of the top of the device, the A620BT's infrared port has been relegated to the left-hand side. While there aren't any other places it could go where it would be more conveniently sited, there's still something unintuitive about not having it on the top of the device, and even we spent a moment wondering why we were having trouble beaming photos to the handheld until we released the MyPal was facing the other PDA end on.

Above the A620BT's screen are the on/off and now obligatory voice record button, alongside of which is the PDA's microphone. Asus bundles its own Settings application to control a number of the device's features, including microphone gain and sensitivity. Adjusting both did little to improve the quality of the recordings we made - this is definitely not the best PDA we've used for spoken messages.

The screen, however, is rather fine. The colours are vibrant and the display looks good across the big range (255 levels) of backlight intensities Asus provides. It offers a very wide viewing angle, as you'd expect from a transflective LCD panel, and unlike other Pocket PC screens we've seen, the component colours of anti-aliased ClearType text didn't appear to separate out as the viewing angle increased.

However, the dithering on the 24-bit photos we beamed over was very apparent thanks to the screen's low dot pitch. This is a common problem with Pocket PC machines, which do suffer from much poorer displays than Palm PDAs do, for instance. Our Palm Tungsten T, from which we beamed the pictures, can only display 16-bit colour too, but its more compact 320 x 320 panel makes a big difference, blurring away the dithering you always get when a device tries to show hues it doesn't have the colour depth to handle. Pictures converted to 16-bit colour in Photoshop looked splendid, however, and as we said, the Asus' screen produces some very rich looking shades.

The screen's backlight intensity is applied using the Asus Settings app we mentioned earlier, which provides two adjusters, one used when the PDA is running on batteries, the other when it's connected to the mains. That's a nice touch for users who keep their PDAs active when cradled.

The settings app also lets you alter the PDA's left-right stereo sound balance, and boost the level of treble and bass in the sound - all handy features for users who like to download songs to their handhelds. We found the A620BT's sound quality to be pretty good, especially with the bass turned up. It's no iPod, but the PDA is good enough to stand in for it when you don't want to carry more than one device around. Use headphones, though - the A620BT's internal speaker, like the microphone, isn't great, particularly at high volumes.

Finally, Asus Settings allows you to set the device's "Run Mode" - essentially how it balances processor horsepower against battery life. You can choose from three fixed modes: Turbo, Standard and Power Saving, which clock the handheld's Intel XScale PCA255 processor at 400MHz, 300MHz and 200MHz, respectively. A fourth setting, Automatic, changes the device's run mode on the fly, according to processor demand.

There's also an Advanced Performance Enhancement check box, but Asus gives no guidance as to what this does precisely.

With it turned on, and the device set to Turbo mode, we ran SPB's Benchmark suite. The numbers aren't at all bad, particularly on the graphics test. Bigger bars are best. Both the Dell and the HP are also based on 400MHz XScale processors, the former running Pocket PC 2002, the latter running Windows Mobile 2003. 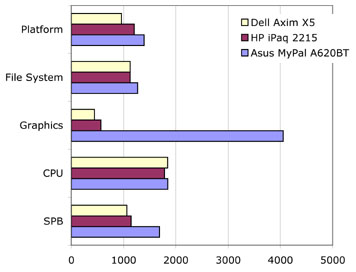 We should point out that the Dell and HP figures are not ours, but were taken from the SPB online database and are provided here for a broad comparison. Our upcoming Axim X3 review should provide a better set of figures to contrast with our own A620BT numbers.

Asus Settings isn't the only software the company provides pre-installed. Asus Backup copies all your data or just the PIM information - you choose - to the device's Flash memory or to a CF card. Asus SmartKeeper does exactly the same thing, but copies everything to either of those safe locations automatically when the battery reaches a certain level. It can also be run manually, making us wonder what the point of the Backup application is.

Asus also offers a Launcher program as an alternative to the Start menu's Programs option. Asus Launcher provides a Palm-style interface for your applications, which can be organised into user-defined categories, the better to reduce screen clutter. It's a nice idea, and it does make application management easier, we found. However, when we went and changed the contents of the Start menu in the usual way, half the aliases displayed by Launcher broke, so it's none too robust.

As we said, what differentiates the original A620 from the new model is Bluetooth support. Windows Mobile 2003 implements Bluetooth through two utilities, Bluetooth Settings and Bluetooth manager, both access from the Today's page's Bluetooth button at the bottom right corner of the screen. Settings allows you to decide which services you'd like to use, such as file transfer between devices, business card exchange, setting the PDA to access audio servers, or even to become a server itself. It's here you set the name the device shows to other Bluetooth devices, and decide whether it's visible to them and whether they can connect to it. 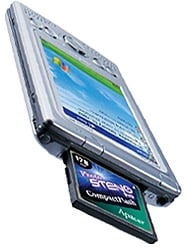 Bluetooth Manager then provides Wizards to connect to other devices, and a list of connections once they've been set up, such as cellphone pairings and Internet connections.

Setting up such connections isn't difficult, though the software could have been better designed - where you expect to tap on a connection name to select it, you simply highlight it and tap the OK button in the top right corner to exit that part of the application.

We successfully paired the A620BT with our Nokia 6310i, but when we tried to dial into our ISP, we had no luck. The PDA contacted the phone, sent over the number then seemed to drop the link. Now, Nokia's Bluetooth implementation is known to be somewhat idiosyncratic, but as Palm has shown with its PhoneLink app, it's possible to work around that. Still, users of other Bluetooth phones may have better luck.

The A620BT is a fast PDA that finally gets the built-in connectivity it deserves. Microsoft's software isn't perhaps as friendly as it could be, but it works, and allows the device to move beyond the infrared era.

The handheld's screen is superb, as are the joypad control and buttons, which should please mobile gamers. So too will the sound quality and sound adjustment options - this is a good multimedia machine, particularly with the improvements Microsoft has made to the OS in that area.

Alas the US power supply bundled with our review model prevented us from doing any true battery life tests, but subjectively it felt good, even with Bluetooth turned on. We got a few days' use out of a single charge. Run flat out, we understand the device yield about four and a half hours' use - pretty much what you'd expect from a Pocket PC these days. Asus claims you can expect 19 hours' of continual usage with less strenuous tasks, though that's with Bluetooth switched off. It's a shame, then, that Asus hasn't made the battery removable.

We're not fans of the Compact Flash format, but Asus has implemented it well. The A620BT doesn't feel large, and it isn't heavy, yet it can take a wide range of add-in cards. It's slim enough to appeal to users who only have CF memory cards, or none at all, yet flexible enough for folk who to want to add bulky CF devices.

However, if you're not a gamer or a CF card user, there's little here to differentiate the A620BT from other devices. Its looks are good, but won't wow you. It's Bluetooth support isn't unique.

At just under £320, the price isn't bad, but again nothing special. You can pick up various Bluetooth-enabled iPaqs for a similar figure. And Asus doesn't give you much extra software for your money, unlike Dell, for example.

The A620BT is a good Pocket PC device, but Asus needs to do more to make it stand out from the crowd. ®