Calling up the menu provides access to the player's settings, including playback options - shuffle and repeat either one song or all of them; the display's contrast and backlit duration; the auto-power off timer, and the player's resume state; and the player's equaliser. The latter offers five pre-sets, plus 'normal' - ie. off and a custom option that pulls up five-band sliders controlled using the stick. EQ settings are a matter of personal taste. We found the pre-sets useless but the custom mode allowed us to get the sound we like.

The menu also activates the player's stopwatch function, though why it has one we couldn't figure out. More useful is the FM radio facility. The Chiba's settings allow you to flip the radio from US to European mode, which gives us Brits more finely graded (0.05MHz) hops through the spectrum, the better to zero in on particular broadcasts. Favoured-station frequencies can be fixed into any of eight pre-sets. The settings also allow you to turn stereo reception off, which eliminates the hiss you get whenever you use a radio without a good stereo antenna - a feature not usually associated with portable players.

Actually, we've used a few portable FM radios that are hissy even in monaural mode, but apart from a few pops, the Chiba's reception is pretty good. 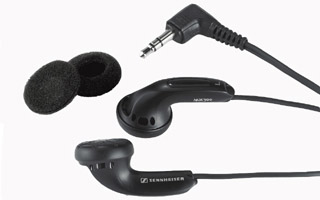 So is MP3 playback. We loaded the player up with four albums' worth of 128Kbps MP3s encoded in iTunes and worked our way through them, at home, on the bus, even on the noisy London Underground. Rio bundles a pair of $8 earbuds from headphone specialist Sennheiser. The sound they produce is rather good - better than the cheap phones shipped with lesser brands - but not a patch on the warm, more robust sound that our iPod 'buds produce.

The Chiba's sound isn't perfect. There's a distinct high-pitched buzz sent through the 'phones when the device is turned on and off. And pressing any of the controls sends a spike through the audio circuits. Fortunately, these heartbeat-like pops are only audible when the volume is turned up to maximum and no song is playing, so the chances of actually hearing them are slim. They certainly didn't spoil our listening pleasure, but that's no excuse for poor circuit design, dodgy components, firmware glitches or a combination of the three. Digital Networks needs to address this.

Like Creative's MuVo NX, the Chiba is one of those rare beasts, a non-Apple MP3 player that's Mac compatible. Unlike the Creative player, the Chiba works directly with iTunes, appearing as an icon in the playlist panel, allowing you to drag tracks over just as you would with in iPod. With the player connected, two buttons appear that allows you to upload firmware and format the player's storage, respectively.

While iTunes lists the player's song list in order, the player itself lists them by filename. Unfortunately, it doesn't support long Mac file names, and the truncation process yields a set of songs that are no longer in order. Renaming the files numerically before copying them over solves the problem, but that shouldn't be necessary. Since the player has access to the tracks' ID3 data, it should organise playback on the basis of that information.

Rio's iTunes support also doesn't go as far as allowing you to compile playlists. Only the Windows-only Rio software lets you do that. The player will also work with Windows' RealOne jukebox software, but like iTunes its functionality isn't as complete as Rio's own code.

While Mac users can't create playlists, the Chiba does provide a bookmark feature. Intended to record different users' settings, the bookmark system can also be used to mark out 'first play' tracks, allowing it to double-up as markers for the start of each album.