Reg Review Dell's first foray into the PDA world, the Axim x5, was big, bulky and frankly no looker, but with a price tag of just a few hundred bucks, no one could complain. Indeed, there have been few grumbles: the x5's price and the Dell brand have pushed the PC maker's share of the global PDA market to 5.5 per cent and it has taken 7.6 per cent of the US PDA business in less than a year, according to market watcher Gartner. 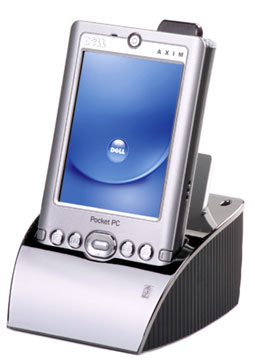 Gartner's numbers cover the three-month period to the end of September, just ahead of the arrival of the x3, Dell's Axim mk. II, in October. However, if the thought that has clearly gone into the design of the new machine is anything to go by, Dell can expect to see those numbers grow further during coming quarters.

Dell is offering two versions of the x3: one with wireless and two without. We took a look at the former, the x3i. All three look essentially identical, with only a small antenna module on the top of the x3i to distinguish it from its siblings. Internally, they're all based on Intel's XScale PXA263 processor, running at 400MHz in the case of the x3i. The two regular x3s runs at 400MHz and 300MHz, respectively. The 400MHz models contain 64MB of SDRAM and 64MB of Flash storage, while the 300MHz version has 32MB of each.

All three x3s offer the same 3.5in 240 x 320 transflective display, and rather nice it looks too, with warm colours - richer than the iPaq h2210 offers. When ClearType is enabled, the anti-aliased text shows clearly even when the screen is viewed at an angle, unlike some Pocket PCs we've seen, such as the Viewsonic V35, where the different colour pixels appear to separate, blurring the text.

However, the x3i's display is inferior to that of the Asus MyPal A620BT and the iPaq h2210, both of which offer much wider viewing angles in both the horizontal and the vertical. Tilt the top of the X3i away from you, and the screen brightness fades away very rapidly.

The x3i's power switch sits above the display, next to the built-in microphone. Below the screen lie the usual app activation buttons on either side of an oval, Tungsten E-style five-way navigator. At either end of the control chain are two further buttons, flush with edge of the device. The left-hand side one activates the voice recording app, the one on the other side toggles the Wi-Fi adaptor on and off (it launches Windows Media Player on the wireless-less x3s).

The radio's antenna is located along with a blue activity LED in a bump on top of the x3i, next to the stylus bay, SD IO card port and the infrared lens. The stylus is a metal one, oval in cross-section. We've seen it criticised elsewhere, but we found it comfortable to use. The SD slot replaces the x5's large CompactFlash bay, which accounts for the two lines' difference in size.

The left-hand side of x3i presents the obligatory jog-dial navigator and a 3.5mm headphone jack. There's a speaker on the back of the device, as is the reset switch and the removable battery, rated at 950mAh to the x5's 1440mAh cell. The large, silvery cradle - which has an embedded Dell logo that glows blue when the PDA is connected - has a secondary bay for recharging spare batteries. A nice touch, that - less so is the very steep, almost vertical angle the cradled x3i sits at, making it difficult to use when connected this way.

Dell says the battery should be charged for four hours before the x3 is activated, but you won't find that mentioned unless you happen to read the manual. The quick start guide simply gives the initial charge duration, not the instruction to keep the device turned off. Naturally enough, we did turn it on.

And we got plenty of 'backup battery too low' warnings as a result. Fortunately, once the main battery is charged, the x3 powers up the backup battery, so you're ready to go. Fully charged, the back-up cell protects your data for 30 minutes while you find a recharge point.

Maxing the screen brightness and running Windows Media Player continuously drains the battery in almost three hours. That's with the Wi-Fi adaptor turned off. Turning it on and cycling through a series of web sites, doing a browser cache refresh each time, gave us an hour's usage for the first half of the battery's charge.

The x3i's CPU can be set to run at Maximum Power, or in Normal, PowerSave or Auto modes. Normal and PowerSave clock the PDA's processor to 400MHz and 200MHz, respectively - Auto switches between them depending on processor load. Maximum Power also operates at 400MHz. That's what the Settings panel says, at least. Comparing PowerSave to Maximum Power, we ran SPB's Pocket PC benchmarking suite and saw tasks taking between half as long again and twice as long to complete. Normal is also slower than Maximum, with tasks taking the same duration or up to 25 per cent longer.

We ran SPB's suite a second time to gauge relative PDA performance. As the chart below shows, the Axim isn't the fastest Pocket PC machine we've seen, being outgunned in every test by Asus A620BT, but it delivers better performance than the old x5, particularly in the graphics test. In the case of the Asus and the x3i, the processors were set to run as fast as possible - the x5 and HP results come from SPB's benchmark archive, but we trust they were taking using a similar CPU configuration. 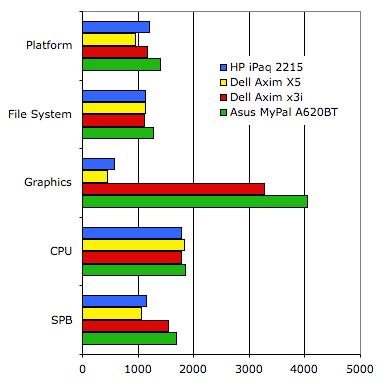 The x3i's WLAN adaptor was a joy to use. At the start, at least. Turning the radio on for the first time provides a list of nearby access points - just select the one you want, and the x3i connects. Easy.

What makes it so is the fact that we used an insecure access point. Returning to base and attempting to get the x3i to connect to our WEP-enabled, MAC-filtering WLAN proved far more difficult. Repeated attempts to connect failed, and involved much wailing and gnashing of teeth as WEP keys and MAC addresses were checked and re-checked. Was the X3i reading the entered WEP key in ASCII form rather than hexadecimal?

Trips to a variety of Dell and non-Dell Axim bulletin boards showed many users with similar problems. We got connected eventually, because we spotted an extra setting in our Proxim Skyline base-station's wireless set-up screen. Apply that, and noting that the WEP keys were set to 'shared', allowing us to check a previously un-checked box in the Axim's wireless network profile page - Network Authentication (Shared Mode) - allowed us to connect.

Experienced network admins should have little difficulty sorting this out. But it highlights a key Wi-Fi problem: terminology differs between vendors. How device manufacturer A labels an option isn't necessarily how access point manufacturer B does. That may not matter if you're using a default-set open network, but if you decide to implement a half-decent level of security and access control, it makes matters very tricky indeed, particularly if you're adding an x3i to an existing network.

It also highlights the abysmal documentation that Dell and/or Microsoft supply. Since WLAN security is important, a more in-depth guide than the list of options Dell provides is essential. Yes, Dell, I know what the checkboxes are called, I can see that. Tell me what they mean.

Softwhere?
Dell isn't noted for offering a big fat bundle of software with its PDAs, though since that's one of the ways it keeps the price of the hardware down, perhaps that's fair enough. The x3i does come with a few extra applications, though. Data Backup does what it says on the tin, copying all your code to the user-accessible internal Flash memory, or to an SD card - handy if you're not going to be connecting the PDA to a host PC, but less valuable if you sync frequently. It's not fast, either, taking around 200s to back-up just over 1MB of data - the first 75 per cent of which took under 30s to write to the internal Flash memory.

Dell also provides Switcher Bar, an app switcher, which usefully lets you quit unneeded apps, but is positioned in the menu bar at the top of the screen so it obscures the name of the application you happen to be using at any given moment. Home, meanwhile, provides a Palm OS-style icon-based application launcher.

More useful is Dell WLAN Utility, which provides you with information about the device's Wi-Fi network connection, nearby access points. It's perhaps not too user friendly, but it does provide all the information you need to establish a network connection, and integrates nicely with the Windows Mobile 2003's own Wireless Ethernet app, which offers little in the way of useful data.

We liked the x3i. It's a good-looking device that feels good in the hand: it's solid but not weighty. The display isn't bad. It's not great either, but perfectly usable.

The x3i is impressive as a Wi-Fi device, too. The x3i's power management gave us a good hour's surfing, which used half the battery's charge. That might not sound much, but that's a lot of email checks. It's also particularly good for a device that's had its battery capacity cut so Dell can deliver a slimmer, lighter model than its predecessor.

But, as we've asked about other WLAN-enabled handhelds, such as PalmOne's Tungsten C, how valuable is Wi-Fi in a PDA? If you know there's a hotspot you can use, fine. But for most of us, a Bluetooth link to enable us to tie our PDA up to a mobile phone and get our email via GPRS will be a more useful solution. Alas the x3 does not include Bluetooth.

It almost did: the x3i's antenna module sports an engraved Bluetooth logo as well as Dell's own WLAN decal. Dell may yet offer a version of the x3 with that form of wireless technology included.

The questionable value of Wi-Fi in a PDA, however, isn't an issue the rest of the x3 range faces, and on the basis of our look at the x3i, we wouldn't hesitate to recommend the either x3.

What really sells the entire x3 family is the price. Priced for the low end, the x3i nevertheless feels like mid-range device. It's no iPaq, but then it's not priced like one, either. HP's Wi-Fi iPaq, the h4150, comes in at £445/$459, compared to the x3i's £269/$379. The difference buys you a much better screen, Bluetooth and a CompactFlash slot, but is a lot to pay just for three features unless they're essential to you. ®