The P800 updated at last

Reg Review Visually stunning, the Sony Ericsson P900 smartphone is a redesigned version of its predecessor, the P800, which built up an enthusiastic following. It's a GSM/GPRS - alas, not EDGE - video/camera phone that runs the UIQ flavor of Symbian applications, and has removable storage.

It looks like a regular candy bar phone, but the keypad flips down to reveal a 320 x 208 pixel screen for pen input, much like the original Palm PDA. The flip is removable. This new look gives it a much more businesslike feel, but inside it's essentially the same phone. (The P900 shares the same processor and RF hardware, but a different memory footprint, making more RAM available for applications). However the P900 features hundreds of small design changes, to both hardware and software, which alleviate many of the frustrations of using its predecessor.

The most startling improvement is the dazzling 65,000 color screen. Rather than the washed-out look of the P800, which was even more pronounced when using a mandatory screen protector, the P900 has a display sharp and rich enough to compensate for the digitizer.

It's slightly smaller and slightly lighter than its predecessor. In place of the iMac-inspired, bulky translucent-blue of the P800, the P900 is much squarer and sleeker. Both the P800 and its predecessor, the Ericsson R380, used mechanical pins on the flip that physically pressed on the screen when being it was being used with the flip closed. By dispensing with this design, and using electrical connectors to the flip, Sony Ericsson has been able to shave off much of the earlier bulk. The designers are clearly enamored with their choice of materials: the box features the P900 in pornographic close-up. (It's a welcome trend: Handspring's Treo 600 and Sendo's X1 have debuted using premium materials, and although the P900 is plastic, it doesn't feel cheap. And the horrible translucent plectrum has been replaced by a 'real' stylus.

One drawback of the P800 was its poor reception. Although the electronics is essentially the same, the P900 has marginally better gain. It's enough to make a small difference in my back room, but clearly inferior to the Nokia 3650's internal antenna - although that's a larger phone. 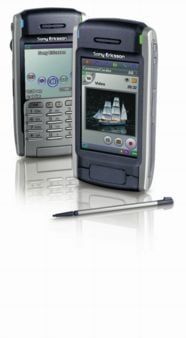 Sony Ericsson has given the phone an additional loudspeaker, so that ringtones, alarms and speaker calls sound much clearer. There's little chance of sleeping through an early morning alarm, which to my cost, I discovered was one of the drawbacks of the P800.

Another significant drawback was the power-guzzling display, which when combined with Bluetooth, meant that users would be fortunate to get through two days of use without a charge. Despite the improved display, Sony Ericsson has tamed the beast in the P900, largely through aggressive power management. Some activities, such as playing games, or listening to MP3s have a noticeable effect on battery life: and these are two areas that Sony Ericsson is pushing hard.

However it's the smaller touches that show that Sony Ericsson has been listening to early adopters. The new flip design means that more screen is visible in 'flip closed' mode: 208x208 pixels versus 208x144 pixels, which the vendors says adds up to three more lines of text. Overall, it's a pleasure to use in this traditional flip closed mode, particularly with the addition of an outstanding implementation of T9 text input. Most of the gripes with the P800 related to 'flip open' mode.

It's now much easier to lock the phone, and the 'virtual flip' design has been improved: it's now bigger. The P900 now uses one plane of the five-way jog dial to navigate the menus, rather than switch between default applications. We found this small improvement made a big difference in 'flip open' mode. As with PalmOS devices, there's no easy default to switch between running tasks: a conscious decision on the part of the designers. Other small improvements abound: the P900 sports themes, and a contact manager. The camera now takes videos (with sound) and now makes use of the jog dial.

The P900 proved much more robust than its predecessor, and hasn't crashed or required a single reboot in three weeks. (To be accurate, read "unwanted" reboot, as the phone reboots when being backed up). Multitasking, allowing you to browse while collecting email in the background, remains a strength. When collecting POP3 email on the Treo, we couldn't use the device for anything else.

The P800, like the first versions of the Nokia Communicator and the Treo exhibited some strange radio behavior, at times appearing to lose the signal and struggling to regain it. US networks are notoriously sketchy, and the hilly terrain of San Francisco is a challenging environment for a phone. But the ghost of Lars M Ericsson will be pleased to know we had a smooth reception throughout.

Well, smartphone user interface designers still have some work to do to provide a really human interface: one that's based around how people use the devices. I've expanded on this here, but I think Handspring's designers (now at PalmOne) did an excellent job of making the phone the 'home'. Out of the box, the P900 doesn't have the flexibility, and new owners will want to race over to Symbianware, whose skinnable Tracker software performs this function and much more, such as 'today' view. (There are some pretty outlandish skins there, my choice being Hazem Haddad's very orange CdeB Orange. Did I mention it was orange?

Although Symbian's UIQ is fast and functional, and makes good use of the space, it could use a buff. A particularly frustrating aspect of UIQ is what the designers call "persistence", but it actually means the opposite. What this means is that when an application is sent to the background, it reverts to a default state. Although this was designed with the best intentions, it costs me time every day. For example, you'll often call someone and discover that they're out of the office. You want to try another number, or send an email. On UIQ, you'll return to the contacts application to find you're looking at the Rolodex view. And because there's no 'recently viewed' list, you have to 'find' the person all over again. An intelligent UI ought to invite the user to call another number, or shoot an email, but failing, that a MRU list in the contacts book itself would save a lot of time. (Enhancing the phone's call log - which is a MRU list) to integrate with the contacts would be another way of doing this).

Thankfully 'persistence' doesn't apply to the MP3 player - switching away doesn't drop you back into a silent playlist, which would be plain silly… but entirely consistent with the UI guidelines. Doh!

Next page: Talking to the PC and the Mac
Page:

If you've got no OS of your own, you've got little chance to compete, Firefox maker sighs
Applications23 Sep 2022 | 57

Updated A day in the G is like a day on the farm. Every meal a banquet. Every code checkout a parade. I love the G
Bootnotes23 Sep 2022 | 24