Hitachi and Japanese ciggie lighter maker Tokai will ship a direct methanol fuel cell system for PDAs in 2005. And they have already built the prototype, the pair said this week.

The two companies believe they can develop the prototype into a device the size of a AA battery, as their concept design shows. 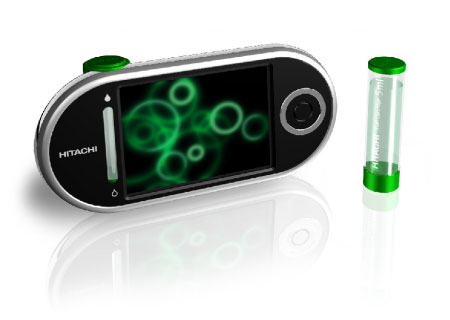 Inside the cell, the methanol fuel is mixed with air in the presence of a catalyst coats on the electrode. The catalyst comprises metallic nano particles between 1nm and 2nm in diameter. The chemical reaction generates electricity. It also produces water and carbon dioxide, making it more environmentally friendly than other battery technologies, the companies claimed.

The prototype contains a 20 per cent solution of methanol, enough, the companies say, to provide sufficient fuel to power a handheld device for six to eight hours. The water produced by the electricity-generating chemical reaction is used to dilute the fuel down to the right concentration, 3-6 per cent, needed for the reaction to take place.

Hitachi first demonstrated its fuel cell system back in March. NEC is also known to be working on a similar system of its own, as is Toshiba. Unlike Hitachi, they are targeting the notebook computer market.

In October, Toshiba showed off a PDA-sized version of its fuel system that can recharge a mobile phone. ®