Review A little while ago I reviewed the IBM ThinkPad T41 and I have to say that I really liked it. I liked it so much in fact that I chose it as my companion when I travelled to Las Vegas for CES. There it did its duty admirably as I had to write up everything I saw at the show as well as edit and upload copy sent from back home, writes Riyad Emeran.

However, it isn't quite perfect and there were one or two points that ultimately robbed it of a perfect score. I am therefore very happy to report that pretty much everything that wasn't quite right with the T41 has been addressed in the T41p. In fact, it isn't just the issues that I had with the original T41 that have been addressed, there are features packed into the T41p that I hadn't even hoped for. With all this in mind, and I don't say this very lightly, the T41p is, quite simply, the best notebook computer I have ever used. 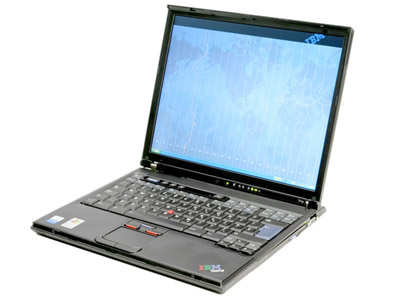 The T41p shares the same chassis as the T41, so it's beautifully crafted, ergonomically excellent and slim. But it's what's on the inside that counts, and the T41p is very different to its sibling. For a start, the T41p doesn't use Intel's Centrino platform. Now, I'm a big fan of Centrino since it offers superb battery life as well as integrated wireless networking, so why would IBM choose not to use Centrino in its flagship model? The answer is simple, IBM wanted to implement something even better.

There's still a Pentium M CPU inside the T41p, running at 1.7GHz. This is backed up by a healthy 512MB of RAM, which is a big improvement on the slightly stingy 256MB found in the T41. There's also a capacious 60GB hard disk and a DVD-ROM/CD-RW combo drive.

One of the big advantages of a Centrino notebook is that it has integrated 802.11b wireless networking, and IBM is well aware of the importance of this feature. So, to cater for the wireless warrior, IBM has implemented its own wireless adapter into the T41p, so this little beauty supports 802.11a, b and g. Obviously you'll need to be connecting to a wireless network that supports the 802.11g standard to make use of the extra bandwidth, but more and more g devices are hitting the street every day. So, top marks to IBM for making the T41p somewhat future proof in the wireless arena.

You don't just get Wi-Fi - the T41p has integrated Bluetooth functionality as well. So, even if you can't find a Wi-Fi hotspot, you can connect to the Internet via a Bluetooth mobile phone.

Ergonomics are paramount in a notebook, so the keyboard, pointing device and screen all have to be up to scratch. The T41p has all three of these areas are taken care of in style.

Anyone who's used a ThinkPad will know that IBM produces the best notebook keyboards in the business. The keys are full size and shaped to accept your fingertips. The travel on each key is just right, while the break is perfectly weighted to spring your finger back up ready for the next key stroke. The Return, Backspace and right Shift keys are all large, just the way they should be, and the Spacebar is a good size too. The cursor keys are also in the right configuration and dropped slightly down from the main keyboard. IBM has also shaped the chassis in front of the cursor keys to make it easy to slide your fingers into place.

Pointer manipulation is again well catered for. Whether you prefer a TrackPoint or a touchpad, you'll be equally happy since the T41p sports both. I love TrackPoints and I think it's a shame that more notebooks don't use them. With the pointer controller located in the middle of the keyboard I never have to take my hands away from the keys. Just below the Spacebar are three buttons that work with the TrackPoint. The left and right buttons are identical to the left and right buttons on a mouse. The middle button controls scrolling. Pressing this once will allow you to scroll up and down through a document with the TrackPoint, while pressing it again will return the TrackPoint to its pointer moving duties. If you find it too much trouble to press the left button to select, you can tap the TrackPoint instead to elicit the same result.

Below the TrackPoint buttons is the touchpad which works equally well. Finished in a similar matt black to the rest of the case, the touchpad blends in with the overall design. Below the touchpad are its corresponding left and right selector buttons. 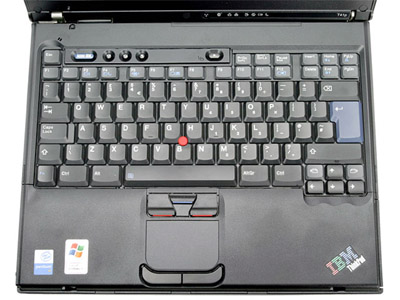 The third ergonomic hurdle to jump is the screen and it's here that the earlier T41 stumbled. With a resolution of only 1024 x 768, the screen on the T41 just wasn't up to scratch compared to competing notebooks from the likes of Sony and HP. However, the 14.1in TFT screen on the T41p sports a native resolution of 1400 x 1050 which is much more acceptable and in line with other high-end notebooks. The higher resolution allows for a far easier working environment and it's possible to have multiple windows side by side, making it easy to cut and paste between documents. The screen itself is a fine example of a TFT display with no dead pixels in evidence and bright, even lighting across the entire surface. The viewing angle is also particularly good for a notebook panel, so giving the odd meeting presentation with the T41p shouldn't be a problem.

The T41p needs a good screen because the graphics chipset is very special indeed: a ATI Mobility FireGL T2 chipset. In fact, the T2, with its 128MB of dedicated RAM, makes the T41p more of a mobile workstation than a notebook computer. This chipset excels under both OpenGL and DirectX environments. You can see from the 3DMark and Aquamark scores that this is a very fast notebook in a 3D environment. And the fact that we ran SPECviewperf at all, is an indication of this machine's workstation leanings.

Despite its slim build, the chassis of the T41p is well featured. At the left you'll find two USB 2.0 ports, an S-Video port, a 56Kbps modem socket, and headphone and mic ports. You'll also find port for the Gigabit Ethernet adapter.

To the right is the DVD-ROM/CD-RW combo drive as well as a D-SUB port in case you want to use an external monitor. Finally at the rear is a parallel port and the power socket.

The T41p ships with an extended battery as standard and the results are very impressive. Running MobileMark 2002 the T41p turned in a battery life time of five hours 52 minutes. With this in mind you can get a good day's work out of the T41p without the need to seek out a power socket every couple of hours. The extended battery does protrude slightly from the rear of the chassis, but this is a small price to pay for almost six hours of usage out in the field. The performance score under MobileMark was quite low, but again, when away from a power socket, the amount of battery life is far more important to me than raw performance.

When connected to a power socket the performance is stunning, with the T41p managing a SYSmark 2002 score of 174, making it the fastest Pentium M based notebook we've seen. Of course the superb 3D scores and the incredible battery life just make the performance story even stronger. All in all you're not going to find a slimline notebook with better performance than this one.

So, it would seem that there is absolutely no down side to the ThinkPad T41p. Well, that's not quite true, because all this cutting edge technology, great build quality and superb performance comes at a price and a very hefty one at that. With a street price of £3227 including VAT, the T41p is one of the most expensive notebooks out there.

Is the T41p is worth the money? It's not too difficult to see where the money is going. You've got cutting edge graphics, leading edge wireless networking, a great chassis, excellent input devices and a superb screen. I have to say that if money was no object and I had my choice of notebook computers, the T41p would be at the very top of my list. Ultimately though, if you don't need all the features that the T41p has, you can save a lot of money by looking elsewhere. But if you absolutely must have the best, no matter what the cost, this is it.

IBM has produced a truly stunning notebook computer made up of the best mobile components available. Yes it's ludicrously expensive, but that doesn't stop it being a superb mobile workstation, and definitely doesn't stop me wanting one.