Bluetooth in there, too

Reg Kit Watch Asus has launched its first Wi-Fi PDA, the MyPal A716. The device also offers Bluetooth wireless connectivity to provide Internet access via a compatible mobile phone when you're out of range of a hotspot. 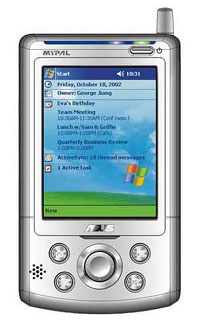 The A716 is powered by an Intel XScale PXA255 processor clocked at 400MHz and runs Windows Mobile 2003. It contains 64MB of SDRAM, with 53-55MB available to the user depending on which language you choose (55MB for Western languages; 53MB for Chinese).

In addition to 802.11b and Bluetooth, the device offers fast infrared connectivity (4Mbps) as well as standard-speed (115.2Kbps) infrared. Expansion is provided by CompactFlash and SD Card slots.

The A716 has the usual 3.5in 240 x 320, 16-bit colour PocketPC screen spec, but at least it's a transflective panel. If it's anything like the display used in Asus' MyPal A620BT Bluetooth-only PDA (see our review), it'll be good. Asus claims the device is capable of 60fps video playback.