Reg Kit Watch Sony this week unveiled a new low-end PDA, the Clié PEG-TJ27, set to ship alongside the high-end TH55 and mid-range TJ37 devices it announced earlier this month.

The device had been expected, but caused some surprise when it did not form part of last week's Japanese launch. However, the TJ27 finally arrived yesterday when all three Cliés made their US debut. 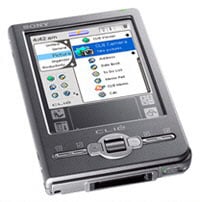 The TH55 and TJ37 are both Wi-Fi enabled. Not so the TJ27. It also lacks the other models' MP3 playback facility. However, like the TJ37, it does offer an integrated VGA digicam and a 320 x 320 16-bit colour transflective LCD screen.

And - again as per the TJ37 - when the new model is rotated by 90° the display automatically reformats itself to take a picture in landscape mode.

The TJ27 runs Palm OS 5.2 on a 200MHz Motorola i.MXL processor and offers 32MB of memory, only 23MB of which is user-accessible.

The TJ27 will retail for $200; US pricing for the TJ37 and TH55 come in at $300 and $400, respectively. They will ship in the US on 24 February, though Sony is taking orders now. They will be available through other retailers in March. ®