US puts on pair of robotrousers

A great step forward for humanity

Some people never learn. Anyone who has ever seen the chilling and prophetic Aardman animation The Wrong Trousers will be fully aware of the perils awaiting he who attempts to produce the world's ultimate pair of strides.

Be afraid, then, at the announcement that Berkeley Robotics Laboratory has been for some time developing BLEEX - aka the Berkeley Lower Extremities Exoskeleton - a Terminator-style pair of cybertrousers for tomorrow's Starship Trooper. 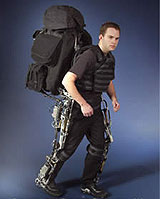 BLEEX will enable the future warrior to travel vast distances and effortlessly carry huge loads - all thanks to 40 sensors and motors which combine to provide the ultimate walking experience.

Naturally, BLEEX is a little more than a couple of strap-on pogo sticks. The whole device has been cunningly put together to become as one with the user. There are no buttons, joysticks or other paraphernalia which would otherwise impede the relentless march towards the future.

BLEEX is funded by the Defense Advanced Research Projects Agency (DARPA), which is itself funded by the Pentagon. The development team does, however, insist that these electronic exogams are not intended to equip an army of super-nimble cyborg killers. Far from it, they expect the potent pins to find a role in worthy and civic-minded activities like firefighting.

All of which will come as a great relief to the Axis of Evil™, since they are not now faced with the terrifying prospect of synchronised tap-dancing Marines advancing inexorably across the deserts of Iran or Syria.

Instead, we have the appealing prospect of technologically-enhanced firemen extracting distressed cats from trees with a single bound. Good show. ®