Well, just under a meg, actually

The camera is a megapixel job by the skin of its teeth. With a 1152 x 864 resolution, it actually contains 995,328 pixels, allowing Nokia to claim megapixel status only by rounding up. Still, it offers a 4x digital zoom, timer mode and what Nokia calls a "high quality lens". 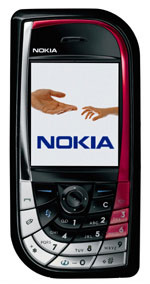 The 7610 runs Nokia's Series 60 UI on top of the Symbian OS. Like the 6600, it features Bluetooth and Kodak's photo printing application. E-mail is integrated into the handset's Messaging app, and the phone provides a Web browser and an MP3/AAC music player, too.

More interesting is Movie Director, which allows video footage to be stitched together into sequences lasting up to ten minutes - thanks to the 72MB of memory the phone provides through the 8MB of on-board RAM and a bundled 64MB MMC "reduced size" memory card. Nokia is also including Lifeblog, which is a kind of digital diary that sits on your phone or PC rather than a web site.

Nokia claims the phone will provide three hours' talk time or 250 hours' standby time. It weight 118g and will retail SIM-less for around €500 when its ships next quarter. ®