Cheaper, more capacious than the iPod

Reg Review Creative's Jukebox Zen remains one of the iPod's most consistent competitors. Since 2001, it has sometimes followed, sometimes led the race to offer the most features in a hard drive-based portable music player. It has never come close to touching the iPod for sheer style, but it has often beaten the Apple machine on both price and capacity.

The latest incarnation, the Xtra, offers 60GB, 40GB and 30GB hard drives, compared to the iPod's 40GB, 30GB and 15GB capacities. The Xtra wins on price, too, particularly at the higher capacities, where its price lead is $99 in the US, £50 in the UK.

So why isn't the Xtra as popular as its rival? Certainly, styling is the biggest factor, not to mention Apple's considerably more aggressive marketing spend - no wonder it has to charge more per unit than Creative. But Apple undoubtedly has the mindshare lead, and has defined the standard by which other hard drive-based music players are judged. The iPod manages to look neither like a device designed by a Japanese consumer electronics giant nor one conjured up by a PC manufacturer. The latter is how the Xtra looks. It's always had the same plastic and metal feel as a typical PC, and the Xtra is more so.

That goes double because of the way Creative has implemented one of the Xtra's key features. Unlike the iPod, the Xtra provides a removable battery. This I like, as it allows you to replace power packs as their capacity fades, and you can take the battery out to ensure you have power when you want it. I'm constantly irritated with the way, having not used my iPod for a while, I pick it up only to find it dead. If I'm heading out the door in five minutes, it's useless to me.

The Xtra ships with a neat 3.6V Lithium-ion cell that's easily removed: flip the catch on the base of the unit to release the front panel, and just pull out the battery. The trouble is, it is just too easy to knock the catch and flip the lid. I did it on several occasions pulling the machine out of pockets and bags, and while adjusting the controls. Once, I accidentally dropped it about a foot onto the (carpeted) floor, and the front panel fell off. God forbid I'd dropped it into a puddle - there's no way the cover would have kept the water out. 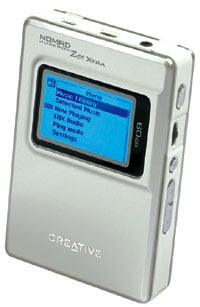 While the catch is spring-loaded, it's still fairly loose. That, plus the thin anodised aluminium used for the front panel and the fact that the latter moves when you push it, gives the Xtra a cheap, rattly feel that reflects its price. This is particularly surprising given how robust the rest of the unit feels.

Speaking of the battery, Creative quotes a 14-hour maximum playback time, but despite an initial overnight charge, I still failed to get the Xtra to function continuously for more than nine hours, usually closer to eight. To test the unit, I just played back the selection of classical favourites pre-loaded onto the hard drive. These are MP3 files, so battery life is likely to be even lower if you use Windows Media 9 files, which generally require more processing power to decode.

The Xtra adds another improvement to the Zen line-up: a better screen. The new display is a seven-line, 160 x 104 panel that pretty much matches the iPod for size, though doesn't look as nice, particularly with its Indiglow-style blue backlight. Still, it does offer all the track details, plus a time count and a progress bar, not to mention mode icons for repeat, battery strength, etc. This is much better than the earlier Zens.

On top of the unit, you'll find its USB 2.0 port for fast music transfers, mains adaptor port and standard 3.5mm headphone socket - there's no remote control unit, which is one way Creative has kept the cost down. On the right-hand side sit the Menu, Play/Pause and Forward/Backward buttons - in between the first two is the jogdial. On the left-hand side of the machine are the Power, Back and Volume up/down buttons. Creative has placed the Menu and Back buttons so they sit under your thumb and index finger - if you're right-handed.

There's no Hold button, though since the buttons are fairly well recessed and require a firm hand, you're unlikely to nudge them. If you do, you can select Button Lock from the menu. Pushing any button afterwards invokes a dialog box asking you if you want to unlock the player.

The Back button works like its web browser equivalent: it steps you through each of the previous screens you've viewed. Oddly, selecting a song to play doesn't take you to the Now Playing screen - you have to select that manually from the menu.