Bob Bemer - the man who helped bring ASCII, the ESCape and backslash keys, and Y2K warnings to the world - died this week at his home on Possum Kingdom Lake in Texas.

Bemer, 84, died as a result of cancer, his stepson told the AP.

During his storied career, Bemer worked at RAND Corp. Marquardt, Lockheed, IBM, Univac, Bull, General Electric and Honeywell. He is perhaps best known for playing a role in the development of the ASCII code for representing English characters as numbers. Reg readers no doubt know ASCII well.

Bemer also laid claim to the creation of COBOL, the ESC key, the backslash key and the 8-bit per byte standard. Last year, Bemer received the IEEE's Computer Pioneer Award, and his many achievements can be found here.

The programmer also gave early warnings in 1971 and 1979 about upcoming Y2K problems.

You might get a kick out of Bemer's "Yes, I am the father of ASCII" license plate seen here. His wife Bettie drives a Mercedes with an "ESC KEY" plate.

Bemer was born on Feb. 8, 1920 in Sault Sainte Marie, Michigan. He left some amazing writings on computing history here. ® 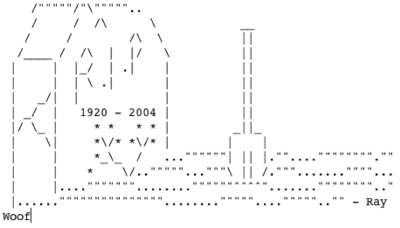