Intel chose to launch its Sonoma chipset at the Ferry Building in San Francisco yesterday, which is San Francisco's Ellis Island, in its way. Generations arrived here, wide-eyed, with only the curves of Los Pechos de la Choca, as the Spanish called it ("the breasts of the Indian girl") rising up at the end of Market Street in the distance. The Protestants subsequently renamed these two fine hills "Twin Peaks", so there's no mistaking what they had in mind either.

These days the Ferry Building has been refurbished, and the ground floor is full of impeccably clean, upscale, and mostly empty delicatessens. One of them sells nothing but olive oil. There used to be a farmer's market here once, in one of the city's periodic downtimes-between-earthquakes, and with a guilty nod to a past that the city fathers have just obliterated, it retains a hint of the theme. Hire a few actors and it could be the United States' first-ever "Farmer's Market Theme Park".

Be thankful Steve Jobs isn't allowed to design entire shopping malls: his would look a lot like this. Great location, imported design aesthetics, lots of shop space but hardly any products, and just some nutters and journalists for customers. Just add Segways.

But we digress. Let us dispense with the Sonoma event itself briefly - you can read the speeds and feeds we posted here a couple of days ago.

First, our old friend Mooly Eden, the engaging former head of the chip design team has been promoted to VP of Something Digital at Intel, and was the launch MC. We're not exactly sure which division this is, as Intel seems to have borrowed a marketing manual from 1999 and renamed all its new divisions to contain the words "digital" and "lifestyle". Don't they know the word digital is now synonymous with "crap"?

Mooly told us how "mobility" had transformed our lives. Again.

The way Intel describes mobility, you'd think we'd just been washed ashore and suddenly grown arms and legs, like tadpoles turning into frogs that stand upright, and race away to the nearest Wi-Fi hotspot

A friend who recently got a laptop computer views it a little differently:

"If I'm staying overnight all I used to need was a phone, a toothbrush and an iPod. Now you need the notebook, the charger, cables for the iPod, a Bluetooth dongle.

"Real mobility is an internet cafe on every street corner, like in Asia. Then you don't need to bring anything."

Asked about Wi-MAX Mooly said Intel hoped to support the network in late 2006 with a ramp in 2008.

Mooly was pretty frank about early problems getting Centrinos to talk to hotspots. Apparently there was a simple, secret technique - but Intel had disclosed the information only to Ronald McDonald. And being mute, the fast-food icon's attempts to mime the setup sequence for WEP instead had been disastrously unsuccessful. 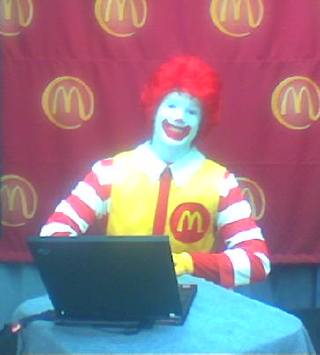 But moments later - and we pinched ourselves to make sure we weren't dreaming - we were alone on a boat in San Francisco Bay with a very important person from IBM's Thinkpad division. Robert Herman, the program manager and director for IBM's Global Thinkpad Brand.

Thinkpads aren't just good, they sometimes seem like the last remaining Wintel PC notebook that works. They're sturdy, well made, well supported and there's absolutely no sign of a Windows key. So IBM has decided to get rid of the division, and Lenovo, a Chinese company will co-manufacture Thinkpads for the next five years.

"It's not signed yet," was Robert's response we kicked off with the Lenovo deal.

Sonoma makes its way into the Thinkpad line in the shape of the T43, alongside the current flagship T42. Intel has worked hard on the graphics, and for the first time in the top-of-the-range line IBM includes integrated, rather than discrete graphics support.

It wasn't just for costs reasons, he said, but many 2D business users would find the price performance to be plenty good enough.

IBM doesn't expect an early ramp for the new PCI-Express bus - "there were just not a whole lot of vendors" supporting it at this stage. But Herman expects the first cards to come from 3G networks in the shape of WAN cards. Then we could expect to see it replace parallel ATA with serial ATA drives.

IBM will continue putting high end features into both the R and the T lines, differentiating the more expensive T seris with better materials, such as the magnesium case. But they undergo the same rigorous testing, Herman said.

Don't think about OLEDs, these were years away, he chuckled. We asked why the wonderful X31, barely over 2 pounds in weight, had been canned. There are smaller notebooks of great ingenuity from Asian manufacturers, but these feel like promotional drinks coasters. Herman replied that team was proud of its successor, the T40, which had undergone a fairly extensive redesign to integrate an optical drive. It's a pity - an X31 running Mac OS X would make at least one reporter very happy. Maybe Apple can find something that hits the sweet spot in the market called "weightless and almost indestructible". (You can still find X31s on eBay, if you hurry).

And we shouldn't expect to see a revival of the two spindle design used in the A31 series. The floppy disk finally looks like it's on its way out.

Oh, and a cheer for the excellent Thinkpads.com community site. Robert said it "was a nice place for a secondary source of info", which is a compliment indeed from an IBMer. While the PC division hasn't exactly been a moneyspinner for Intel, they've got a nice thing going with the Thinkpad team. Just don't let anyone wreck it.®