Sister Strangelove made a man out of me

And ninethly The young often when they have learnt all they can learn accuse her of an inordinate pride. She says yes of course. She has always known it and now she says it - Gertrude Stein

The boring, tired adage states that you can't teach an old dog new tricks. As a middle-aged freedom fighter, I've always taken offense at this notion. There's a reason it's an adage and not a maxim. Us oldies can rock the party that rocks the party too.

With wonderment, I watched this week as someone who seemed doomed to repeat her tricks over and over again embraced the spirit of rebellion and experimentation. Hilary Rosen - the former head of the RIAA (Recording Industry Association of America) - came out against Apple's restrictive, proprietary grip on iTunes. This remarkable, pro-consumer revelation appeared in the most public and populist theatre possible - the new Huffington Post.

Try your hand at finding the right simile to describe this metamorphosis. Like a pig vomiting up slop? Like a homicidal maniac turning to the pro-life movement? Like a devil rejecting sin? 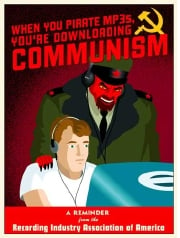 Those of you who know me well might assume that Rosen would sit near the top of my most admired list. She led the RIAA and its member music labels to war against Napster and later P2P copycats. She presented the notion of lawsuits against consumers that her successor Mitch Bainwol would turn into a course of action. Who among us hasn't wanted to slit the tendons of thieves and watch as they hemorrhage justice back to The Man?

Rosen, however, led a fruitless crusade that in the long-term was more of an attack against capitalism's progress than the defense of intellectual property rights. The very out and very colorful lesbian failed to see the rainbow of options before the music industry, deciding instead to hump the leg of dinosaurs. A braver woman might have tried to guide the media moguls to a brighter future. But apparently that's not what Rosen was paid to do.

Thankfully, these past transgressions can be ignored now that Rosen has a new master and a new outlook on life.

"The problem is that the iPod only works with either songs that you buy from the on-line Apple iTunes store or songs that you rip from your own CD’s," Rosen writes. "But . . . other music sites have lots of music that you can’t get at the iTunes store. So, if you have an iPod, you are out of luck. If you are really a geek, you can figure out how to strip the songs you might have bought from another on-line store of all identifying information so that they will go into the iPod. But then you have also degraded the sound quality. How cruel.

"Why am I complaining about this? Why isn’t everyone?"

Rosen is so right on this issue that she has managed to destroy past impressions of her as an iron-fisted hater of consumers and worshipper of monopoly. The music industry lobbyist has learned new tricks!

Microsoft, many of you will recall, recently underwent the same type of conversion. It went from gay, to not gay back to gay again. Change, while frightening, can be the most fantastic of things.

A lesser man would deny the incredible attraction Hilary's shift conjures up within his soul. He would remind himself of Hilary's gay leanings and choose to admire her from afar. I am not a lesser man.

Ever since my dear wife Gertrude passed - God bless her soul - I've been searching for a spirit that could tame the unbridled yearnings which consume me. No woman has seemed up to the task until the new Hilary Rosen came along.

"The new iPod my girlfriend gave me is a trap," Rosen writes. "Yeah, it is great looking and I really love the baby blue leather case but when, oh when, will Steve Jobs let me buy music from somewhere other than the Apple iTunes store and put it on my iPod?"

Was this signal - this cry - aimed directly at me? Wasn't this line from the new Hilary Rosen saying, "I have a girlfriend now, but I've proved that I can change"? Wasn't Hilary - pictured in all her glory on this fetish site - declaring her openness to the potential of heterosexual love?

My assistant wrote this week to the Huffington Post asking for an answer to these very questions. We've yet to receive a reply. So please, new Hilary, consider this an open letter to you. I request little more than a date or at the very least a sensual podcast. I can assure that I'm the man for the job. ®

Otto Z. Stern is a director at The Institute of Technological Values - a think tank dedicated to a more moral digital age. He has closely monitored the IT industry's intersection with America's role as a world leader for thirty years. You can find Stern locked and loaded with a life-sized cutout of Hilary Rosen at his solar-powered compound somewhere in the Great American Southwest.