We're obliged to neoLuddite Resistance Army (NRA) monitors world-wide who have - over the last month - alerted the Montana command bunker as to the potential threat of the Japanese cyberminx, aka "Repliee Q1Expo", which is an animated, lifelike representation of a human female which many of you suspect might form part of the Lizard Alliance's plan to mate machine and flesh in order to breed a hybrid slave army in the service of the CyberDyson Corporation.

Rest assured, though, that all is well. Our silence in the matter was due not to having ill-advisedly taken a jaunt in a Renault Vel Satis, but rather the necessity to maintain a complete operational silence while an NRA black ops team travelled to Japan to investigate the menace first-hand. 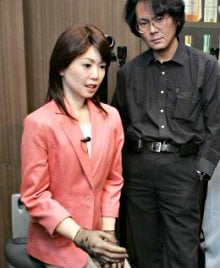 Repliee Q1Expo boasts silicon skin, 42 compressed air-controlled actuators and is controlled by a computer which enables the robonymphette to mimic the movements of a real human - right down to fluttering her eyelids and "breathing".

All well and good, but the man responsible for Repliee Q1Expo, professor Hiroshi Ishiguro of Osaka University (seen here with his creation, we think on the right), admits it's a pretty poor substitute for the real thing, as he explained to the BBC: "Repliee Q1Expo can interact with people. It can respond to people touching it. It's very satisfying, although we obviously have a long way to go yet."

Ishiguro reckons it might one day be possible to construct an android which passes for human, but only briefly. "An android could get away with it for a short time, 5-10 seconds. However, if we carefully select the situation, we could extend that, to perhaps 10 minutes," he conceded.

Of course, he would say that if he were controlled via explosive cranial implant from the Lizard Army mothership. Our initial suspicions were that Repliee Q1Expo was in fact a fully-functioning sex droid programmed to seek out and extract low-grade male sperm suitable for the propagation of submissive drones. As we have previously noted, this puts online gamers and Linux programmers at particular risk from attack, especially since few if any have ever seen a real woman in the flesh. Accordingly, the robostrumpet does not have to be a particularly convincing physical representation of the human female form.

Nonetheless, it does still need certain powers of seduction in order to entrap its victim - for instance, the ability to discuss the comparative merits of Linux/Windows/OS2 or Grand Theft Auto and Quake. We can, mercifully, confirm that Repliee Q1Expo is unable to give forth on either subject, thereby reducing her chances of geek impregnation to virtually zero.

What's more - and we advise NRA activists to try this only after completing our "Advanced Replicant Identification Course" - a close examination of Repliee Q1Expo showed that she does not actually have reproductive organs at all, unlike motorised floozy "Andy" developed to produce liquid metal offspring for the French automotive industry.

Sceptical NRA members should take this warning very seriously. While Repliee Q1Expo certainly looked and acted the perfect lady with her demure posture and modest Kylie-esque features, black ops van driver and machine gynaecologist Dave got a hearty slap in the chops for his trouble when he lifted her skirt. Enough said.

Safely back in Montana after checking out a false alarm regarding a robotic karaoke singer reported to have removed the kidneys of two Tokyo salarymen drunk on synthetic Scotch, we filed the Repliee Q1Expo dossier under "monitor for future developments" and ordered a Defcon state of "Warwick" for all NRA cadres around the globe.

We should explain that at any time, the neoLuddite Reistance Army is on a state of alert appropriate for what we believe to be the imminent threat of full-scale technological uprising. These Defcons range from the lowest level of "Segway", at which point we can all go to the pub for a skinful without fear of being assaulted by murderous cyberloos, to Defcon "Schwarzenegger" (known informally in the command bunker as an "Arnie") which heralds a 98 per cent likelihood of a full-blown hoover uprising within the next 24 hours coupled to an all-out attack of Citroen C4s supported by self-combusting bendy buses and rat-brain-controlled stealth aircraft.

In the case of Repliee Q1Expo, then, our biggest concern was that some RFID-chipped boffin would crawl out of the woodwork and start giving forth on TV about how by 2010 every home would have a perfectly-formed android maid programmed to bring you your Bluetooth-enabled slippers and park your flying car. In the circumstances, we decided it was safe to take our first summer break since the disastrous 2003 Spanish jaunt which, were it not for the timely intervention of an NRA sympathiser within the Guardia Civil, would have certainly resulted in some time at His Majesty Juan Carlos's Pleasure.

The events can be summarised thus: Dave - at that time a twitchy, spotty, machine-hating youth barely out of NRA boot camp - became suspicious of a perfectly innocent cigarette machine in Miguel's Bodega, our temporary base due to its irresistible blend of Sky Sports and real beer in proper pint glasses.

Indeed, despite our protestations that many Spanish vending machines were equipped with voice synthesisers which thanked you most kindly for your trade, Dave became convinced, after it must be said considerable quantities of cut-price sangria, that the device had become self-aware and that the whole coast, if not the entire province, was in immediate threat of nicotine-driven machine subjugation.

The aftermath of Dave's unannounced intervention resembled somewhat a scene from The Battle of Algiers, with sobbing locals stumbling choking from the remains of the bodega, while ambulance crews frantically searched for Miguel under a collapsed display of Iberian hams and tinned black olives.

Mercifully, no-one suffered any long-term adverse effects from the blast except, sadly, Dave's then girlfriend Courtney. The visibly-shaken Basingstoke temp secretary, while attempting to pick the remains of scorched anchovies from her Club 18-30 t-shirt, angrily demanded to know "why the bloody hell you brought a laser plasma pulse assault rifle on a Benidorm beach holiday?" and, not unreasonably: "And what the bloody hell do you lot get up to every weekend anyway?"

Over cover blown, we had no choice but to erase Courtney's short-term memory with a device hastily improvised from a microwave oven and a portable CD player. It worked a treat, except that she forgot not only every detail of the exploding bodega, but also why she liked Dave in the first place. The next day, she ran off with a Liverpudlian timeshare salesman and is now living in a small flat in a retirement golf complex close to Torremolinos.

Suitably shaken by this close shave, the NRA supreme council now takes its holidays without EMP battlefield devices or advanced, alien-developed weapons technology of any description and most certainly without Dave, who now passes his annual vacation servicing the Montana bunker's fleet of Sinclair C5 electric cars - the only motorised vehicle so low tech it represents no threat whatsoever to humanity.

Of course, as we are now unarmed and completely defenceless, our choice of holiday destinations is severely limited to those destinations so bereft of technology that there is not the slightest chance of encountering so much as an obstreperous electric toothbrush.

Accordingly, we now salute fellow NRA members from the sun terrace of the Mbandaka Riverside Hotel in Democratic Republic of Congo, safe in the knowledge that the sound of distant gunfire is not our African comrades tenaciously holding off batallions of man-eating cyberloos, but rather just warring tribal factions settling their differences in the time-honoured local fashion.

In the meantime, stay vigilant and alert us immediately of any threat meriting Defcon Laguna or above. ®

No payment details exposed in breach, says retailer, but shoppers told to be 'vigilant about potential scams'
Cyber-crime30 Jan 2023 | 2

Did Pathfinder get lost in Intel's sea of red ink? Or is Chipzilla becoming RISC averse?
Software30 Jan 2023 | 14

But the first rule of Chip Fight Club must be observed. Meanwhile Beijing may have its own shadow bans
Systems30 Jan 2023 | 14