And the winners are:

You want conspiracies? Try this, from Willy Fedrushkov: 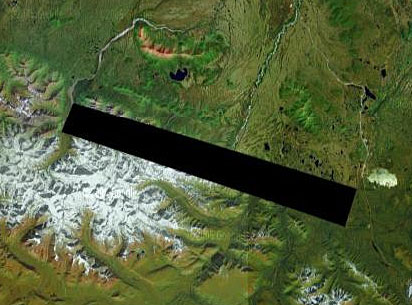 According to Willy, this site north-east-ish of Valdez, Alaska, is the site of a HAARP weather-control weapon of death facility. Interestingly, the obscured area straddles the US/Canada border, so could it be that the two nations have struck an unholy alliance to bring destruction upon their enemies? Chilling stuff indeed.

Not as chilling as this, though, from Andy Mabbett, who describes it as: "Well dodgy. Need I say more?" 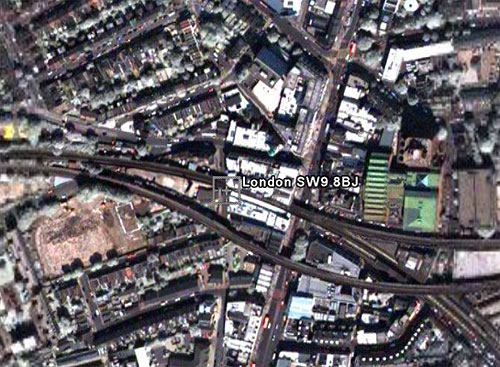 Yes indeed, that's Vulture Central as seen from space. Or at least it was - until we moved the entire staff to an underground, surveillance-proof facility closer to the centre of London. Where? Aha...

Speaking of surveillance, Arturo Quirantes wanted to have another look at Rota US/Spanish naval base, which we previously perused:

You missed an interesting spot. It is a giant AN/FRD-10 "bullseye" antenna, also known as "elephant cage" antenna (see http://www.fas.org/irp/program/collect/classic_bullseye.htm)

Most oddly, the Rota elephant cage exists no more. Looks like the black helicopters rushed to the spot (after the Google imagery, of course) and completely removed it. That does qualify for the T-shirt prize, does it not? 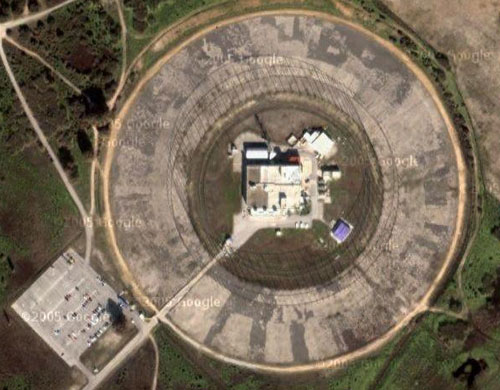 Yes it does, as does the following from the prodigious Google Mapper David Branch - a slightly less sinister example of decommissioning: 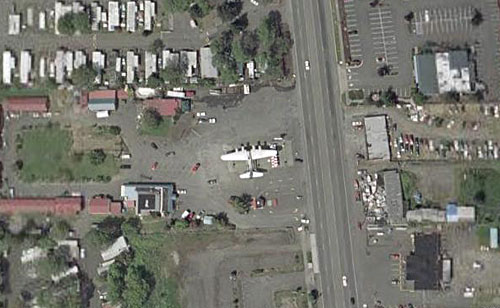 We've edited down David's epic explanation of how this aircraft came to be sitting in this unlikely location, but it's still worth quoting at length:

Milwaukie, Oregon - only in America can you beat a B-17 into a gas station.

Shortly after WWII a guy named Art Lacey (he had a British wife) went to Kansas to buy a surplus B-17. His idea was to fly it back to Oregon, jack it up in the air and make a gas station out of it. He paid $15,000 for it. He asked which one was his and they said take whichever you want because there were miles of them. He didn't know how to fly a 4 engine airplane so he read the manual while he taxied around by himself. They said he couldn't take off alone so he put a mannequin in the co-pilot's seat and off he went.

He flew around a bit to get the feel of it and when he went to land he realized he needed a co-pilot to lower the landing gear. He crashed and totaled his plane and another on the ground. They wrote them both off as "wind damaged" and told him to pick out another. He talked a friend into being his co-pilot and off they went.

They flew to Palm Springs where Lacey wrote a hot check for gas then they headed for Oregon. They hit a snow storm and couldn't find their way so they went down below 1,000 feet and followed the railroad tracks. His partner sat in the nose section and would yell, "TUNNEL" when he saw one and Lacey would climb over the mountain.

They landed safely, he made good the hot check he wrote, and they started getting permits to move a B-17 on the state highway. The highway department repeatedly denied his permit and fought him tooth and nail for a long time so late one Saturday night he just moved it himself. He got a $10 ticket from the police for having too wide a load.

Marvellous. The Russians, too, like parking up their old hardware for the benefit of the public, as Adrian Esdaile explains:

Poor old Russia. Once they built spaceships, now they turn them into theme-park restaurants for the Moscow kiddies to drink capitalist Coca-cola and Macburgers. Not like the old days, comrade: 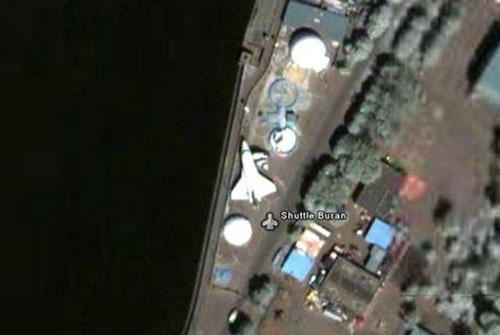 Here's some more kit parked up, although it's not quite as harmless - Minutemen missiles at Minot AFB, North Dakota: 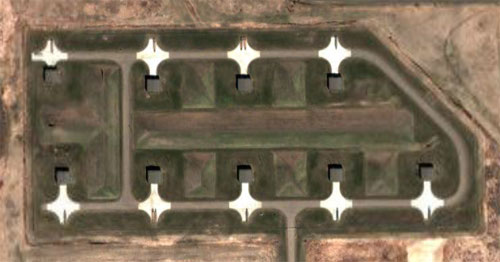 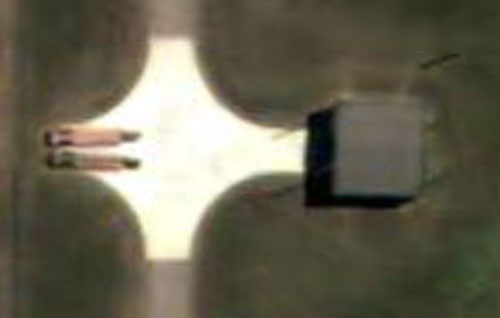 Thanks to Tim for that eyeful of airborne death. At least the missiles appear to be turned off, which is more than you can say for the linear partical accelerator at Los Alamos National Laboratory. Matthew Landt illuminates:

This is just outside the area that was forcibly blurred by the government. The interesting part is, that if you look closely, you can see some sort of explosion or fire based exhaust on the back of one of the buildings. I put a picture of the whole Accelerator and a close up of the "explosion" 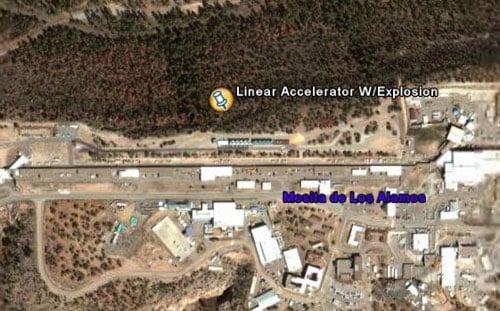 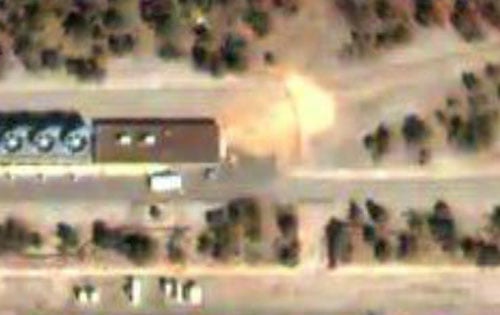 Blimey. We do hope they know what they're doing.