San Francisco–based GitHub, the online repository popular among software developers, suffered a major service outage on Thursday morning due to what it characterizes as a "very large DDoS attack." 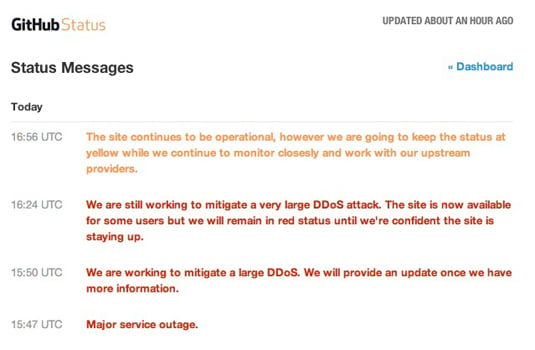 This major attack follows a similar one on August 4th

The outage was first reported on the GitHub Status Messages page at 15:47 UTC (8:47am Pacific Time).

GitHub is a major code repository used by developers across the world. It hosts a mixture of public and private projects split across open and closed source.

The site works using the Git version-control system, which is a commonly used tool of devs across the world to deal with large code projects. Over the past few years, the site has become one of the main places that people push their repositories to, and for that reason an outage has a major effect on the developer community.

One potential reason for why it is targeted so frequently is that it is a central repository for a large amount of projects, some of which are closed source. DDoS attacks are frequently used by hackers as a way of probing vulnerabilities in a site, so there is a chance these outages come from probing attempts by hackers keen to get at code stored on the service.

"The site continues to be operational, however we are going to keep the status at yellow while we continue to monitor closesly and work with our upstream providers," the site's Status Messages reported at 9:56 Pacific time. ®