Hitchhikers' Guide to the Galaxy for real?

CES Sony is to bring its Librié e-1000 electronic book to the US in March, the company annnounced at CES today.

The device has been redesigned since is launch in Japan in 2004, and renamed the PRS-500 Portable Reader. The second-generation unit is smaller - it weighs 250g - and thinner - it's 1.3cm deep, including its leather-like cover - and features a dual MemoryStick Pro Duo/SD slot to augment the "under 100MB" memory built in. The integrated memory is enough for about 80 books, a Sony spokesman told us.

The unit's display is an eInk-developed 170dpi job that doesn't need a backlight. It's not at all bad for text - in addition to e-book formats, the unit displays PDF and RTF documents - with an exceptionally wide viewing angle in the horizontal and vertical planes. With only four shades of grey supported, pictures don't look too good, and I noticed some image ghosting, with a few previous pages still vaguely visible through the currently viewed one.

The PRS-500 has an integrated rechargeable battery that will handle 7,500 page turns on a single charge, a company spokesman said. That figure probably goes down somewhat if you use the device's audio playback facility.

eBook content will come from Sony's own Connect download service in March, which, in the same month, will also expand to offer full-length movie downloads for Sony's PSP. 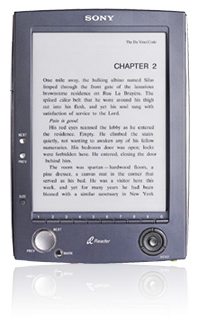