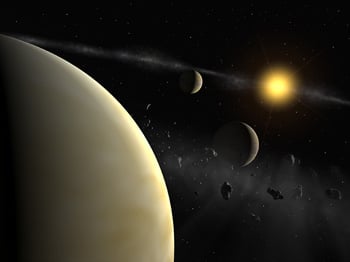 Astronomers have revealed that a nearby solar system has a planet that could harbour liquid water. Techniques applied in the investigation have also made the search for more habitable planets easier.

The snappily-named HD 69830 system is in the constellation Puppis, around 41 light years away.

The Sun-like star has three Neptune-weight bodies orbiting it, ranging from 10 to 18 times the mass of Earth. The Switzerland-based researchers report in Nature that the two innermost planets are likely to be rocky rather than gas-dominated.

The system also has an asteroid belt, similar to our own, between the inner planets and a third body. The outer planet is the most interesting in terms of life.

Although it is surrounded by a massive gaseous envelope, simulations suggest it has a rock and ice core. It lies at the inner edge of the system's “habitable zone”, where liquid water could exist on the surface. Fabulously named Bern University co-author Willy Benz explained: “This alone makes this system already exceptional.”

The planets were given away by the Doppler effect. When an object is moving relative to astronomers on Earth, Doppler shift changes the wavelength of light coming from that object. The movement of stars with planets is altered by them in a way which is detectable in their Doppler signal.

“The planetary system clearly represents a Rosetta stone in our understanding of how planets form. No doubt it will help us better understand the huge diversity we have observed since the first extrasolar planet was found 11 years ago.”

The 180-odd extrasolar planets so far discovered by this method have tended towards the more massive end of the spectrum; bigger planets produce more easily detectable Doppler wobbles. The new trio are at the lower end of the scale, and the techniques refined in the course of the investigation should mean that more Earth-sized worlds will be found soon. ®

If you absolutely must keep using those proprietary formats, walk this way
Applications19 Aug 2022 | 3