Six startups from the Web 2.0 swamp

This site puts a Hummer, for example, up for bid in a reverse auction. Your goal is to have the lowest, unique price for the Hummer at the time the auction closes. You send in bids via text messages and take a premium - say $1 - charge for each message.

In the past, Limbo has given away a Hummer for $30 and an iPod for about $2. It and the phone companies make money via the text messages being sent. The company claims that thousands upon thousands of bids are made for each product and even boasts that it could one day get up to 1m bids for an item.

On the surface, this seems like a win-win for everyone involved. The consumer gets a Hummer for $30, while the companies backing the technology make tons of cash, literally, out of the air. Every time you bid, you generate points as well. So, if you don't win the Hummer, you can go to the Limbo store and buy a DVD with your Limbo points at something close to market value.

The whole idea makes us pretty uncomfortable, and others felt the same way.

Beyond the unease, we can't understand why anyone would bid until the moments right before the auction closes, which translates into much fewer bids than Limbo imagines. Also, how many people will stick around over the long-term when they've never been able to win one of the items?

Limbo is governed by sweepstakes laws, and it's little more than a dressed up lotto. Proceed with serious caution.

Inkling is like the Total Information Awareness project in a sea of colored balls.

The company doesn't have the dark undertones of a Poindexter, but it does dabble in betting on markets. What kinds of markets? Well, just about anything you can think of really.

The folks at Inkling tell us that companies can set up markets and have workers bid on what types of features a product should have or when the product will actually ship. The "market" tends to get closer to reality than product managers and will divine the truth. More on the consumer side, you can bid on who will win the Super Bowl next year or where hurricanes will hit.

We have such serious doubts about this technology that it's hard to know where to begin.

Can the "market" really tell where a hurricane will hit? We wouldn't bet New Orleans on it, but Inkling insists that the market is right about 75 to 80 per cent of the time, and claims to have data to support the premise. [ Chimps produce similar results - but you don't hear about the Wisdom of Chimps - ed ]. Veterans also have their doubts.

We asked one of the company founders what happens when bullies at a school start betting on how long it will take for a nerd to have his head beat in, and were told that Inkling plans to introduce a type of self-policing mechanism.

The company quotes the Japanese proverb "none of us is as smart as all of us..." We prefer Despair.com's version: 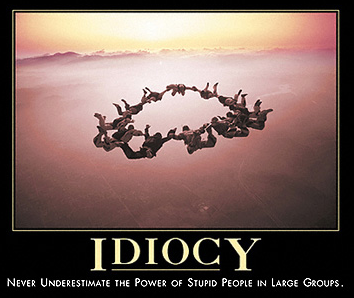 At the very bottom of the list, we come to Browster, which earns the dubious Kurtz Award.

This company has come up with software that lets you hover over a link and quickly see the entire web page without actually clicking your mouse button.

Instead of dealing with the rigors of tabbed browsing, users can now glance at hundreds upon hundreds of web pages at, erm, mouse-over speed. Browster claims that the average user will look at about 10 times as many web pages as a result of its technology. This potentially means more money for the likes of Yahoo! and Google. You can see Browster CEO Scott Milener try and explain the great browsing gains here.

If this technology took off, Google or Yahoo would be able to create their own version of the code over a long weekend and knock Browster flat. Milener, however, insists that making an extra browser window is "harder than it looks" and assured us that the company has patents on the technology. He also reckons that people get addicted to surfing with an extra browser window.

Time magazine apparently dubbed Browster "one of the year's coolest innovations", which speaks volumes about the mainstream media's attachment to reality.

Milener has basically taken a mouse gesture and created an entire company around it. We can't believe people fund this.

(Also present was OQO, which isn't a Web 2.0 company, but it might as well be. OQO makes a teeny, full-fledged PC. It's not a PDA, it's not a laptop and that's the problem. Without doubt, the company has impressed by cramming a full computer into something about as big as two or three or even four cellphones. But, if we wanted to carry around a warm brick in our pants, we'd work at brick factory, and sure as hell wouldn't pay $2,000 for the honor.)

An enlightened PR company, Bite is streets ahead when it comes to showing off its clients. We just hope these companies have enough cash to pay their fees before they expire. ®