Those of us chronicling the inexorable Rise of the Machines™ know only too well the dangers of forming emotional bonds with technology - albeit a mere fondness for your Dyson, or a slight affection for your new Renault Laguna.

The reason, as members of the neoLuddite Resistance Army among you are already aware, is that as soon as you have formed a comfortable, trusting relationship with your machine than it will kick you down the stairs in an display of vacuuminous rage or subject you to a 125mph, white-knuckle kamikaze terror ordeal. 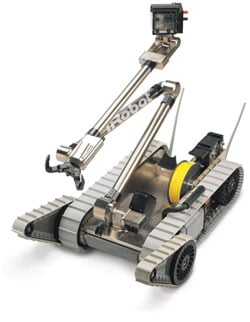 It is, then, with dismay that we offer a Reuters report on the growing tendency for front-line US troops in Iraq to get friendly with their iRobot PackBot EOD (seen right) - a bomb-disposal droid version of IRobot Inc's remote-controlled bot, of which around 300 are currently deployed in that sun-kissed paradise astride the Tigris.

One EOD, nicknamed "Scooby Doo" by his comrades, had already selflessly completed 35 bomb disposal missions when he was dispatched to that great breaker's yard in the sky. According to IRobot Inc supremo Colin Angle, one distraught grunt pleaded with repair technicians: "Please fix Scooby Doo because he saved my life."

Angle explained: "I think it's very rational. [Scooby Doo] was someone, something, that was doing a great service for them and thus when they brought it back, it was viewed not just as a loss of a machine gun or a piece of body armor or a helmet. It was a loss of a contributing member of the team."

Of course, while our fear that once the growing army of EODs has completely gained the confidence of the US military it will turn upon its human masters - advancing relentlessly across the Iraqi hinterland to a battle cry of "Scooby-dooby-do!" - is tempered by the fact that its intended victims are suitably armed to repel a robotic uprising, we are rather more concerned with the possible to threat to humanity posed by IRobot Inc's Roomba and Scooba domestic cybercleaners.

After all, your average housewife does not have a M109A6 Paladin Self Propelled Howitzer readily to hand in the event of homicidal Roomba assault, and most grandmothers will not - when her Scooba receives the "kill" activation signal from the Lizard Alliance mothership - be able to bring down a hellish concentration of Apache helicopter gunship ordnance on the satanic floor-scrubber.

For the record, IRobot Inc has sold more than two million Roombas. It's currently contracted to supply a further 213 bomb-disposal packbots to the US Navy. Consider yourselves warned. ®

Pinging search services in the US, China, Russia perhaps not ideal for privacy
Personal Tech26 Jan 2023 | 7