HD TV in the UK

Need a next-gen telly? We'll put you in the picture

Buyer's Guide Even if you don't give a flying tackle for the football, the industry's out to sell you a brand spanking new HD TV. But is now the right time to buy? Reg Hardware guides you past the gotchas...

The digital switchover starts in 2008 when the Border region has its analogue signal turned off. The process then works through Granada, Wales and the West Country in 2009; Grampian, Scottish and the West in 2010; Yorkshire, Central and East Anglia in 2011; and culminates in London, Meridian and Ulster in 2012. The consumer electronics industry is using the 'Big Switch' to sell HD-ready TVs but the truth is that you can quite happily watch digital TV on a regular analogue CRT TV, as anyone who uses a Sky, NTL, Telewest or Freeview set-top box can testify.

It's easy to get confused by this FUD, as the majority of the buying public associates digital TV with a flat LCD or plasma panel. The situation isn't helped by the World Cup. The 1966 tournament was the first to be broadcast in colour and now the 2006 event is the first to go out in HD, so there's a major push to convince footie fans to buy HD TVs.

But if you've visited a TV shop recently and seen an HD TV in action it's a safe bet that you were watching current standard definition (SD) TV content because there is almost no HD content being broadcast at present. If you were lucky, you saw a regular DVD, while many stores' current pinnacle is an HD sample from the BBC streamed from a hard drive.

The TV itself will have been a flat LCD or plasma screen because most British houses aren't large enough to accommodate a full-size rear-projection DLP (Digital Light Projection) TV, which is a shame as they are relatively inexpensive. The Samsung SP50L6HDX sells for about £1,349 which is pretty darn cheap for a 50in (125cm) screen. However, DLP is an acquired taste as the colours can be harsh on the eye so the picture lacks the warmth of a plasma display's image. There are such things as HD CRT TVs, but you're unlikely to find many of them in the UK as they are big boxes that take up a huge amount of space. Samsung has a slimline version in the works, the 32in WS32Z409TQ, which retails for around £450. 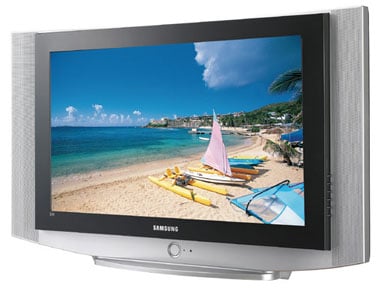 It would be lovely if we could come up with a rule of thumb to separate plasma and LCD screens but the latest LCDs look absolutely superb, with gorgeous colour reproduction. If you walk around a showroom and hold your hand above the vents at the top of the TV you'll find some plasmas are incredibly cool while some LCDs are surprisingly warm, both contrary to the stereotype. In practice there's little to choose between the two technologies, so the main thing is to trust your eyes and your judgement, instead of blindly following the spec sheet.

For a TV picture to be HD it has to be one of three resolutions: 720p, 1080i or 1080p. There are other resolutions, but they're essentially standard definition (SD) sizes. The resolution's number is the number of horizontal lines that make up the image, analogous to its height in pixels. The letter, p or i, stands for 'progressive' or 'interlaced'.

Progressive images are displayed like a movie, one frame at a time, in rapid succession. Interlacing is the same technique used in regular TV: send half the picture at a time but do so twice as quickly. It's a bandwidth-saving technique. Each 'half' of the image comprises alternate sets of lines, so first you send lines 1,3,5,7... etc. then you send 2,4,6,8... and so on. The first set is drawn on the TV screen, then the second lot, but the speed is such that they eye doesn't notice.

Well, almost. In practice, this approach can create visible artefacts when rapidly moving images and there's a slight downgrade in the image's effective resolution. This isn't an issue with progressive pictures, which is why most US HD broadcasters show programmes in 720p not 1080i, even though the latter has more pixels and therefore should be more detailed. ®