Then sell it on eBay, naturally

Forget Area 51: welcome to Area H5N1 - otherwise known as the International Bird Rescue Research Center (IBRRC) in Fairfield, California - and location of the first confirmed sighting of an alien secreted within the body of a duck: 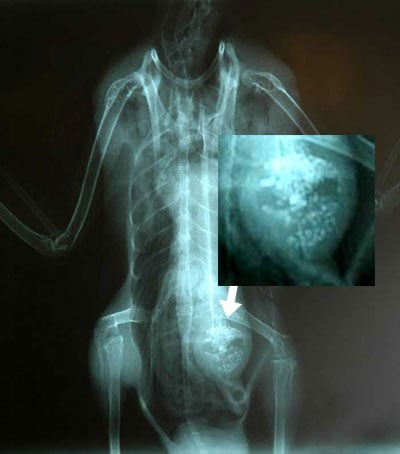 On Sunday, May 21st, an adult male mallard was brought to the International Bird Rescue Research Center (IBRRC), with what appeared to be a broken wing. Since 1971, the IBRRC has been rescuing birds from the devastating effects of oil spills around the world. Marie Travers, assistant manager of the center, radiographed the mallard and was immediately shocked by what was revealed on the x-ray. A very clear image of what appeared to be the face, or head, of an extraterrestrial alien was in the bird's stomach.

IBRRC big cheese Jay Holcomb told the San Francisco Chronicle: "We're a 35-year-old organization, and we've seen a lot of things—bullets, fish hooks—but this is the first time anything like this has shown up."

Sadly for UFOlogists, Holcomb reckons the extraterrestrial apparition was actually "caused by grains of food in the duck's digestive system". The poor animal popped its clogs shortly after the X-ray was taken and an autopsy found nothing more than grain in its gut.

There is some good news, however. The original plate has now landed on eBay, where has already attracted a top bid of $4,599. The cash raised will go towards the centre's bird rehabilitation programme. ®

A Roswellian thanks very much to Steve Dodd for the tip-off.