The newest addition to the Google family has just hit the web - the search giant's very own accredited pharmacy, selling pills at rock bottom prices. 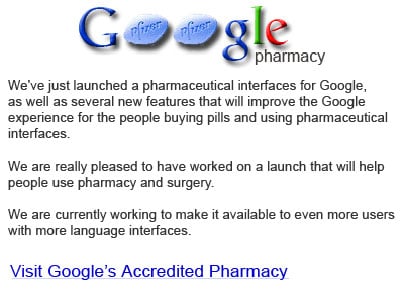 Pharmaceutical interfaces, we love it. However, since we weren't entirely sure what they were, we decided to have a look.

We landed at a familiar site: but, surprise, surprise, it wasn't Google, but rogue pharmaceutical site ED Choice. ED Choice pretends to sell generic Viagra, generic Levitra, generic Cialis and other generic products that can't possibly exist, as the patents on these products have yet to expire.

Which explains why ED Choice is hiring spammers to sell its products, and why it constantly changes its server address or URL to avoid a sudden meltdown by angry hosting providers.

Rogue sites selling fake medicines are rampant these days, as NBC's Inside Dateline showed last weekend. The news show posed as an online pharmaceutical company called The Hansen Group and started trolling the web looking for suppliers of counterfeit medicines. Within weeks, companies all over the world were offering them pills of every description - from fake Viagra to Tamiflu.

Most offers were from China, which isn't surprising, as most drugs with the Viagra label sold in China are counterfeit. A Hong Kong contact even agreed to ship thousands of fake Viagra tablets every week to the Hansen Group, a deal with an estimated value of $10m.

The good news is that the people behind the operation were put behind bars before the documentary was aired.

More importantly, a ruling in a Beijing court this week could put halt to the burgeoning industry. The court overturned a 2004 decision by China's patent review board, which would have allowed local drug makers to sell legal generic versions of Viagra in China. The decision could dent the widespread availability of potentially lethal or harmful fake medicines on the net, experts say. ®