Most of Gelsinger's talk centered around Intel's new "Core" architecture being rolled over the next year for servers, desktops and notebooks. This is the design that Intel hopes will stall AMD's market share march by giving Intel a product that does well on a performance per watt scale.

For the first time that we can think of, Gelsinger confessed to an internal squabble over how long Intel could keep pushing GHz rather than heading toward a lower power, multicore product line like its competitors.

"We thought we had a couple more generations of these things to go," he said, while other people within Intel said "we had to change."

Despite falling behind rivals, Intel has now caught up and has "engineering marvels" on the way. Intel will introduce the Woodcrest chip for dual-socket and below servers "next week," Gelsinger said. He then went on to chastise AMD for making disingenuous claims about how Opteron will stack up against the new Woodcrest server chips.

"With all deference to the marketing program of the 'A' company . . . a lot of (what they say) doesn't bear out when you look at load and latencies." 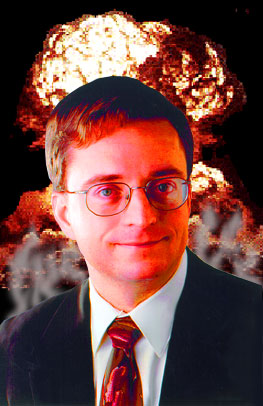 In particular, Gelsinger thinks AMD makes too much of its on-chip memory controller. Intel thought it more practical to keep relying on pumping data through the front side bus and boosting performance by strapping chips with mammoth caches.

Er, but, Intel will adopt the on-chip memory controller anyway. "Yes, we will do it at some point," Gelsinger said.

Gelsinger also confirmed the obvious by saying Intel will start producing eight-core processors when it moves to a 45nm manufacturing process in 2008.

"Opterons don't have a chance against Woodcrest," one customer at a prominent financial services company told us. "Under Windows Server 2003 64-bit running SQL 2005, the pre-release Woodcrest systems are over 30 per cent faster than a similar Opteron, while consuming a smidgen less power.

"Intel got caught 100 per cent resting on its laurels for one full CPU generation. It's not going to happen again."

One of the big challenges facing Intel and AMD as they move to multi-core processors is a lack of software than can take advantage of the fancy chips.

"A couple of years ago, I had a discussion with Bill Gates (about the multi-core products)," Gelsinger said. "He was just in disbelief. He said, 'We can't write software to keep up with that.'"

Gates called for Intel to just keep making its chips faster. "No, Bill, it's not going to work that way," Gelsinger informed him.

The Intel executive then held his tongue. "I'm won't say anything derogatory about how they design their software, but . . . " Laughter all around.

VMware co-founder Mendel Rosenblum was sitting in the audience at Stanford and called Gelsinger out on the Gates jab.

"As much as I like to hear someone make fun of Microsoft, Bill Gates was dead on," he said. "This is a paradigm shift. Am I going to get a magic compiler that will parallelize my code?"

Gelsinger went on to confirm that Intel will re-introduce Hyperthreading in the generation of chips that follow "Core," which will add to the software adventure.

You can find even more about some of the geekier issues Gelsinger addressed here. ®