Whiney EFF and RIAA knocked by digital license go ahead

The US copyright office's proposal to simplify the nightmare of licensing digital music has been rubber stamped by a House committee - despite the objections of the RIAA and the Electronic Frontier Foundation.

The US copyright office agreed that services such as Napster and iTunes found mechanical copyright licensing a nightmare on a song-by-song basis, and proposed extending the blanket license to cover wholesale digital downloads and streams. Yesterday, the enabling legislation was officially introduced.

Both the Digital Media Association, DiMA, and the National Music Publishers’ Association welcomed the move.

"Fast and efficient music licensing will ensure that songwriters and music publishers are fairly compensated and that creativity in the music industry thrives," said NMPA president David Israelite in a statement. DiMA president Jonathan Potter said it would reduce both legal risk and transaction costs for his members, who include Apple, Napster and AOL.

The legislation also ensures that intermediary copies of digital media making their way down the pipe don't command a royalty.

The Recording Industry Ass. of America had raised deep objections to the proposal, as it sees blanket licenses destroying its distribution advantages.

Under a blanket (or 'compulsory' license) for consumer downloads, record labels fear they would lose control of their hard-fought grip on physical distribution channels, and lose control over pricing. In fact, they'd simply have to work harder to gain a bigger share of the pie, and innovate to find new outlets for their copyrighted material.

"SIRA removes record companies from the digital music value chain of which they've been a part since the beginning of recorded music and would prohibit them from selling a final product with all rights included," RIAA chief Cary Sherman told Congress last month, with typical hyperbole.

On the peer to peer networks the RIAA is trying to close down, and which are the real rival to the new digital services, it's hard to see where in the value chain the record companies sit.

But more bizarre was the objection from the EFF.

Of necessity, the blanket license covers "incidental reproductions" of digital media, such as cached copies on the Napster servers, so it can give them a zero royalty.

The EFF cried foul, and claimed that this eroded fair use for consumers.

"Just think of all the incidental copies that litter your computer today - do you have a license for every copy in your browser's cache?" asked EFF attorney Fred von Lohmann.

The EFF is only doing the job it should when it spies subtle and ominous precedents in pending legislation. Alas, this interpretation fails the basic digital literacy test. As DiMA points out today,

"The license is not available to consumers, does not obligate consumers to pay a royalty, and does not address in any way whether consumers can lawfully copy copyrighted works. In fact, SIRA includes a clause to ensure that it does not change fair use law in any way." [their emphasis]. 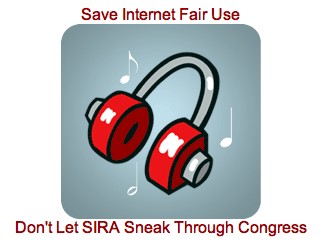 It's also an opt-in arrangement, DiMA stresses. So it doesn't apply to ordinary surfers, and only applies to you, should you be a prospective Napster.

Lawyers are notorious for their literalism, and American lawyers particularly so. Unable to see the wood for the trees - or more precisely, the context for HR.5553 - the EFF has handed the RIAA an arsenal of legal arguments for opposing blanket licenses.

Which incidentally, is the EFF's preferred compensation model. Should a miracle occur, and the opposing parties in the P2P war sit down and adopt the EFF's "Voluntary Collective Licensing" proposal, then the enabling legislation would look a lot like HR.5553. Which suggests this isn't just a tactical goof, but a strategic error - the consequence of not thinking really hard about the future. ®