Cyclists give TV chef a Wikikicking

It's been all go for the last couple of days down at the Wikipedia page celebrating TV food-molestor James Martin, who's earned himself a bit of a Wikikicking from irate cyclists following an entertaining review of the Tesla Roadster for the Mail. 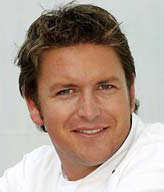 Martin (pictured) wrote: "God, I hate those cyclists. Every last herbal tea-drinking, Harriet Harman-voting one of them. That's one of the reasons I live in the countryside, where birds tweet, horses roam, pigs grunt and Lycra-clad buttocks are miles away. But recently, there's been a disturbing development.

"Each Saturday, a big black truck appears at the bottom of my road, with bikes stuck to the roof and rear. Out of it step a bunch of City-boy ponces in fluorescent Spider-Man outfits, shades, bum bags and stupid cleated shoes, who then pedal around our narrow lanes four abreast with their private parts alarmingly apparent. Do they enjoy it? They never smile. I'm sure they just come here to wind me up."

He concluded: "Twenty minutes into my test drive I pulled round a leafy bend, enjoying the birdsong - and spotted those damned Spider-Man cyclists. Knowing they wouldn't hear me coming, I stepped on the gas, waited until the split second before I overtook them, then gave them an almighty blast on the horn at the exact same time I passed them at speed."

Well, this didn't go down at all well in the pedal-bothering community, and enraged Spider-Man cyclists moved quickly to vent their spleen on Wikipedia.

The James Martin Wikipedia entry currently explains: "Aside from television work, Martin also writes a Saturday column for the Daily Mail. In September 2009, he outraged top cyclists and amateurs alike with his column for heavily denouncing the sport of cycling and its health benefits."

However, a quick shufti at the edit history reveals this alternative take, among other similar edits purged yesterday:

"Following publication of an article in the Sunday Mail in September 2009, it was unanimously decided by the general public that James Martin was a fat fat cunt, with an overriding insecurity about his very small penis, who looks like Jabba the hut whenever he attempts a faux smile thanks to his triple chins."

We hasten to add that this is a private City-boy ponce opinion of Mr Martin, and in no way reflects the deep admiration we at El Reg have for his culinary skills. ®

Among Martin's new-found cycling friends is Olympic gold medallist Bradley Wiggins, who's been giving it some stick on Twitter. Among his comments is this restrained observation: "James Martin TV chef, The word cock springs to mind, stick to Ready Steady Twat mate."

And, of course, there's an obligatory "I Hate James Martin" Facebook group.