A man and his microscope: IBM's quest to make atom-sized chips

Into the Valley When taken into the room holding the world's highest resolution microscope, we expected to witness a pristine marvel of engineering. Workers in bunny suits would be rushing around in an ultra-clean chamber, tweaking the microscope with refined instruments and unparalleled care. Instead, we found a hand-crafted oddity composed of tin foil, a maze of cables and iced tea cans. Somehow this monster can resolve the height variations of a surface down to about 1/10,000 the diameter of a typical atom, according to its creator IBM Fellow Don Eigler.

Eigler works at IBM's idyllic Almaden Research Center and is best-known - at least in certain circles - for using the scanning tunneling microscope in 1990 to spell out I-B-M with atoms.

We recently sat down with the pony-tailed researcher-cum-surfer to discuss past and present work being done at IBM to create nanoscale computers. Eigler walked us through the burden of being the "atom man" and talked up a new technique for building processors one spin at a time.

El Reg: Give us some of the origins behind the now famous I-B-M in atoms work.

DE: IBM has traditionally supported, in some sense, more than its fair share of the long-range research. It has worked very successfully for our business model.

When I started here, I was doing work which was very fundamental. It had to do with understanding the physics of surfaces. This was a very important problem for small things because when things are small enough everything comes at or near the surface or the interface of that small thing to the next small thing near it.

Through a combination of hard work, some horse sense and good, old fashioned blind luck, I happened to be positioned to discover that I could manipulate individual atoms with a scanning tunneling microscope.

El Reg: As we understand it, the particular scanning tunneling microscope was one of your own design.

Building your own instruments is a long-standing tradition of physics. It is my greatest professional strength. If you ask me what I'm strongest at, it is designing and building my own instruments.

El Reg: Well, it used to be a requirement for physicists to build their own equipment, didn't it?

It's certainly not a requirement that everybody be a good instrument builder, but we definitely want, in the community of physicists especially, we want some of our people to be really good at building instruments. There's no doubt about that.

You mentioned that you visited SLAC (Stanford Linear Accelerator) and NASA Ames. Well, there's instrument after instrument at those places that are one-of-a-kind. 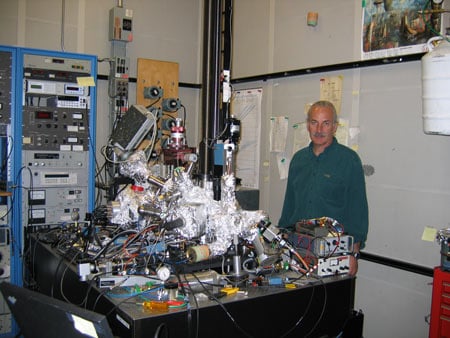 El Reg: What gave your design an edge over the other scanning tunneling microscopes?

El Reg: Spelling out I-B-M seems like an obvious decision, but was there anything else that you thought about printing?

DE: I made that decision on my own. Management never said anything to me beforehand, and I did it with a very clear purpose in my mind. IBM gave me a job, gave me the opportunity when I needed one, gave me the opportunity to excel at doing the things that I love in life, and it was payback time. I pull no punches on that. It was my way of giving back to the corporation some of what the corporation gave to me.

I guess that I could have written out M-O-M. It's three letters and about as complicated as I-B-M. I am sure my mom would have been very proud of that, but she is proud enough of me as it is.

Seriously though, when a group of people or an institution does something good for you, it's your natural impulse to want to do something back.

[You can hear Eigler discuss the larger context behind his work here.]

El Reg: Have you grown weary of recounting all this?

DE: I don't mind talking to people when they're curious, for instance, about what I was thinking about or why did I do this or something like that.

The thing is that I always get introduced to people as the guy who wrote I-B-M in atoms. After you have heard that enough times, you don't really need to hear it five more times. Everybody who knows me will tell you that my ego if anything does not need inflating. That's not a problem.

Not that that inflates my ego anymore. It's old. I just try to tolerate it as best as possible.