Review The jury's still out on whether Microsoft's ultra-mobile PC (UMPC) form-factor is the next step in the evolution of mobile computing or just a development dead-end sandwiched somewhere between notebooks, PDAs and PMPs. For now, all we can do is judge whether the first-generation hardware can actually cut it as a portable PC, and since Samsung was the first to launch such a product, it's in the dock today... 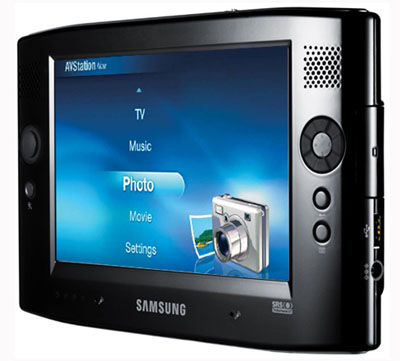 The Q1's about the size of a large paperback book, though it weighs considerably more than that. The front is dominated by the crisp, non-reflective 7in, 800 x 400 display, which looks very fine surrounded by the Q1's shiny black, control-covered faceplate. Make no mistake, this is a nice looking gadget. Below the screen are a pair of microphones, set up as an array to improve their pick-up ability. In the top right- and left-hand corners are the stereo speakers, driven by an SRS TruSurround XT engine.

The sound's not bad, but it's really only the bass-booster that makes a difference. In any case, nine times out of ten, you'll have headphones on. The array microphone is more useful, improving the quality of your end of a VoIP conversation - though network effects can still take their toll on the overall sound quality, of course. Array mics on a notebook with an integrated webcam make sense, but seem unnecessary on a device you unthinkingly pick up and hold in front of you when Skyping - at least, that's what I found myself doing.

To the left of the screen is a circular array of four user-definable application launch buttons, an Enter key and a button dedicated to Samsung's own settings application. On the other side of the screen sit a largely redundant analogue joystick - rather like the one on the Sony PlayStation Portable - and a key to activate non-native screen resolutions.

You'll use the latter rather a lot, though the results are irritating. The 800 x 400 display doesn't have sufficient vertically stacked pixels to show large dialogue boxes, forcing you to change the resolution to be able to see and click OK, Cancel and Apply buttons. You could keep the screen at 800 x 600 or 1024 x 600, but they're not native resolutions so you'll lose the screen's good looks.

If we're going to go beyond the Moon, we'll need food, a way to build stuff, and health diagnostic technology
Science28 Nov 2022 | 7