A French alternative to Google Earth - offering hi-res coverage of the entire country - went into meltdown last Friday shortly after its launch and is still unavailable due to a stampede of punters eager to avail themselves of the free service.

French prez Jacques Chirac chaired the official launch of Geoportail, Yahoo! reports, and quickly administered the Gallic kiss of death to the project by proclaiming: "This is a step forward for all citizens, which places France at the forefront of new technologies."

Geoportail cost the French taxpayer a cool €6m which the National Geographic Institute used to collate 400,000 aerial photos and 3,700 maps. It reportedly allows users to "zoom in to within 50 centimetres of the ground" and to "switch from aerial views of a site, to detailed maps, charts and geological data".

We'll take Geoportail for a spin as soon as France has re-established itself at the forefront of new technologies. In the meantime, the black helicopter-spotters among you will be disappointed to learn that "certain sensitive or military zones" are censored, so we'll presumably have to continue to rely on Google Earth for quality material such as this fine view of naval hardware in Toulon... 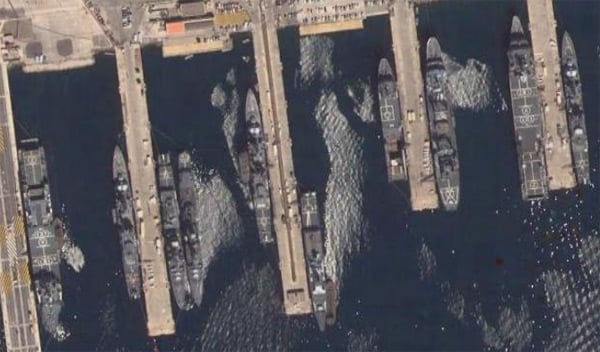 ...or a handsome trio of AWACS at Avord air base:

Those of you without Google Earth can find the Toulon and Avord images on Google Maps here and here, respectively.