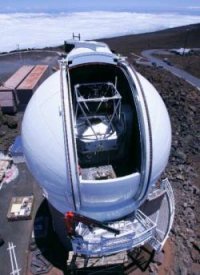 The first of four powerful telescopes which will eventually be capable of locating 99 per cent of potentially-threatening near-Earth objects (NEOs) bigger than 300 metres has captured its first test images, New Scientist reports.

The Hawaii-based PS1 telescope - part of the Panoramic Survey Telescope & Rapid Response System (Pan-STARRS) project, and seen here atop Hawaii's Haleakala volcano - packs a 1.8 metre mirror, and although it's currently kitted out with a small test camera, this will be upgraded to a 300 megapixel device in September and subsequently to a 1.4bn pixel beast in March 2007.

All four PS telescopes should be deployed by 2010, after which they will "scan the whole sky visible from Hawaii three times per month".

The grand plan is the response to a 1998 Congress mandate which required NASA "to identify 90 per cent of NEOs larger than 1 kilometre across by the end of 2008". In 2005, Congress upped the ante by requesting that NASA "extend the search down to objects 140 metres across"* by 2020.

Nick Kaiser of the Institute for Astronomy in Honolulu declared that, once fully operational, PS1 will be "by far the most powerful survey instrument" in the world for pinning down NEOs.

However, there is a catch, according to Brian Marsden, of the Minor Planet Centre at the Harvard-Smithsonian Centre for Astrophysics in Massachusetts. Because of its power, Pan-STARRS may be "the only game in town for a while", he explained. Accordingly, and because lesser instuments will not be able to track the orbits of newly-identified objects, the PS telescopes will have the additional burden of "doing their own follow-up work" in determining whether they pose a threat to humanity. ®

*For a moderately alarming simulation of how the impact of a 100km wide body on Earth would really put a downer on your day, check out this Japanese video. Crikey.