Comment The rolling net "neutrality" debate brought two of the internet's most distinguished elder statesmen together in mortal combat this week. The two gentlemen, Vint Cerf and Dave Farber, said they agreed on most things. But where they didn't, they tried to pull the chair away just as their opponent tried to sit down.

Farber is a professor at Carnegie Mellon, and has tutored several of the designers of key internet protocols. After two decades at MCI, TCP/IP co-creator Cerf is now at Google - leaving him little time to advocate networked chickens and IP-connected toilet faucets. Both were excellent value, and the hour long debate held at the slightly-leftish think tank The Center For American Progress, threw clear light onto the arguments. It was one of hope versus fear. For the pro-regulation camp, Cerf said he feared the telco giants abusing their position and restricting internet services to the end user. In the "wait a minute" camp, Farber said he hoped that existing regulatory mechanisms - ranging from the FCC to the Antitrust department - would come down swift and hard.

You could drive a golf cart through both arguments, which is what makes this debate so interesting. Unfortunately, neither side was permitted to address the technical concerns we aired earlier this week by Richard Bennett, who pointed out that ill-written legislation could throw the baby out with the bath water. (see How 'Saving The Net' May Kill It ). Farber said when technical experts had looked at the issue, they decided potential side effects outweighed the benefits.

As befits someone who's spent twenty years doing a lot of PR for a large telco, Vint Cerf sounded smooth and slightly sinister. He's already acted in a Gene Roddenberry TV drama, and with his poise and velveteen delivery - he sounds quite a lot like Vincent Price - make for an excellent Bond villain. One could almost imagine Vint clicking his fingers, and sending Farber into a piranha tank below.

So the debate moved along familiar territory. Cerf warned the sky might fall in. Farber responded that it probably wouldn't, but if it did, we already had the agencies to prop it back up again.

"There's nothing I can see in the rational responses of the carriers that would indicate they are about to commit legal and antitrust suicide," he said. But rationality doesn't even come into it, when there are rhetorical threats. "The immediate rhetorical threat," said Vint "... was specifically that we would not have access to the broadband channels that the subscribers were subscribing to, unless we paid an additional amount money".

"But you pay money already," noted Dave, "so you'd have to pay a little more?"

"We pay a lot of money already, so the suggestion we were getting a free ride was insulting," he countered, sounding suitably offended. And just as everyone was remembering the AT&T boss' "free ride" remark, and was feeling offended too, Cerf moved in to close down debate down on the subject completely.

"Google operates a large backbone network and connects it to the public internet at considerable expense..." he continued. "So the claim we pay additional amount seemed completely out of the ballpark."

But, why? It all depends on what you're delivering. Charging a premium for a premium service - say, for example, a Google HD Video of Demand presentation of a new Star Trek movie - doesn't strike anyone as unreasonable. But Vint's cunning introduction of "free" allowed him to sidestep the question. Google's humanitarian mission - it was serving "all the world" - should not be maligned by suggesting it moved in the grubby world of commerce. 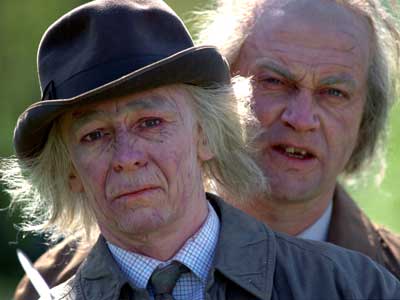 Farber tried a trip-you-up in return. Exclusivity went both ways, he pointed out, and someone like Google might be able to offer a service as 'an exclusive' to net providers of their choosing.

"It's not that Google would do it, but that some company could decide to charge a carrier for providing that traffic - some TV channels [already] charge their carrier."

It's a good point, but his illustration could have been more carefully chosen. Cerf moved in swiftly for the kill, sidestepping the general point by rubbishing the specific example. Google is Good, and would never dream of doing that. Again, it was a fairly cheap way of winning a rhetorical point by avoiding the subject.

It also left us wondering if next year, Congress may care to consider legislation that makes speculating about Google's commercial options, and concluding it would like to make money, a punishable offense. We could call these "Gootrality" provisions.

But if Vint enjoyed such deploying such rhetorical thrusts, he didn't like being on the receiving end.

Time and again, Cerf warned of what he called "rhetorical" dangers. At one point, however, the discussion meandered - via the issue of common carriage - onto a discussion about the future of the US Postal Service.

"I think we should get some real data before we come to any conclusions about this," warned Vint.

This was too much even for the moderator, Carl Malmud.

"So Vint, you're saying you want to wait for real data before deciding on what the policy is. So why Net Neutrality now?"

"It really is one CEO made a couple of statements," Carl reminded him.

"We ... shouldn't ignore them problem and wait for something to happen," Cerf insisted, eventually.

Running with scissors can be harmful.

That's two trips to Vint, then, and one to the moderator. But even if Farber failed to convince us that the anti-competition mechanisms in the US were working - they seemed to do it better in the EC, he conceded - he didn't really need to. To overturn the status quo, dramatic harm needs to be proven, and that hasn't happened.

Your views later - we promise. ®