Samsung has begun mass-producing 8Gb - 1GB - NAND Flash chips fabbed at 60nm, the company announced this morning. It also said it will offer an 8GB chip formed from two 4GB packages mounted one on top of the the other. Each 4GB unit comprises four of the 8Gb dies.

Samsung will be pitching the parts at media-player makers, and it's probably a good bet they'll turn up in Apple's anticipated iPod Nano revision, if the price is right. The players will be based on Samsung media processors, as the South Korean company let slip in April this year. 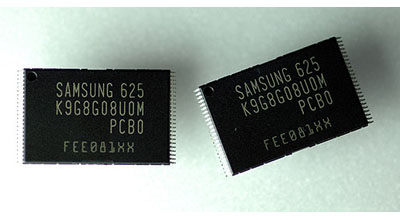 Samsung said the 8GB package will be available later this quarter. ®