Analysis Rather than conforming to rivals' software licensing schemes, IBM has decided to go it alone and price software that runs on multi-core chips in a proprietary fashion. IBM argues that its scheme provides a more accurate picture of how different chips perform, although one could claim that IBM is adding extra confusion to an already complex problem.

IBM this week revealed that it will soon adopt a software licensing structure centered around "Processor Value Units" or PVUs. This model will replace IBM's current per processor licensing policy starting with the release of Intel's four-core "Clovertown" version of Xeon in the fourth quarter. The PVU system will compete against simpler licensing mechanisms from the likes of Microsoft and BEA where the software makers count multi-core processors as a single chip and more challenging mechanisms from companies such as Oracle that use different multipliers to measure the number of software licenses needed per chip, depending on the type of chip.

Many customers found calculating the cost differences between per processor and per user pricing models used with single-core chips daunting enough. Such customers are in for a whole new world of hurt with dual-core, four-core and eight-core processors hitting the market. In the general purpose processor market, the large vendors are all on different release cycles with their multi-core gear. On top of that, there are chips such as Sun's UltraSPARC T1 that don't count as general purpose at all and will be tough to benchmark via broad metrics.

So, let's have a look at how IBM plans to deal with this mess.

First off, IBM asked us to make it very clear that pricing will not change for existing processors.

The vendor took exception with our characterization of its new pricing model laid out in a story earlier this week. In that piece we said that IBM had been pricing software on a per chip basis for x86 processors and on a per core basis for its own Power processors. Not true, we were told.

"We've always priced Xeon and Operton by the core - we were pricing all our x86 dual-core chips at 1/2 license per core," a spokesman said.

We're already splitting hairs here, as you can tell, since using a 1/2 license per core on dual-core x86 chips results in a single software license per chip. (What the hell is half a license, anyway?) But confusion is the name of the game for software makers in the pricing realm.

Under the new PVU model (PDF), pricing remains the same for the old chips but will be described as follows: 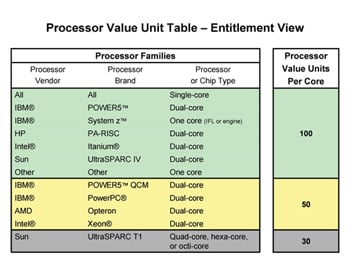 Okay, so that's the old stuff.

From Clovertown on, IBM plans to benchmark chips made by all the major vendors to come up with a unique PVU performance score for each chip. The IBM spokesman said a collection of accepted benchmarks on varying workloads will be used to determine how a Clovertown chip, for example, measures up against Power6 or new versions of Itanium from Intel. Each chip will then receive its very own PVU score that customers can use to calculate software licenses. IBM plans to validate the ratings with as of yet unnamed third parties.

On the one hand, IBM deserves credit for trying to suss out a processor's relative performance. Customers used to deal just with Xeons on the x86 front and then had relatively even(ish) RISC processors to compare. As mentioned earlier, however, that was the single-core model, and the world is very different now.

Intel, for example, just started shipping a dual-core Itanium chip this month, while IBM, HP and Sun have had dual-core chips on the market for ages. Sun has four-, six- and eight-core versions of the hot-selling UltraSPARC T1 available and that processor, which is short on floating point performance, is aimed only at web and application server workloads. Looking ahead, IBM plans to ship the Power6 in 2007 with just two-cores but a high clock rate, while Intel is heading to four-country and Sun is aiming for a 16-core chip for their mainstream, high-end server processors.

It's a bit tough to nail down a one-size fits all model with all of these different chips and release dates.

On the other hand, IBM is essentially diverging from the rest of the industry with a custom process that's sure to benefit its products. For one, IBM can tweak the PVU of its Power chips to make sure they match up well with WebSphere and DB2 licenses, while possibly tweaking the PVUs of, say, Itanium chips to make them seem less competitive. This will be a delicate operation for IBM since it has both hardware and software franchises to protect, but at least IBM will be in control, depending on how much influence the "third parties" have.

In addition, IBM's PVU plan demands that competitors such as Sun and Intel turn over their roadmaps and products to IBM early for testing. We're not sure how well that will go over.