Google Earth aficionados have created a bonfire in the quiet town of Maasmechelen in Belgium, very close to the border with the Netherlands, by revealing that the fountain at the city council office looks like a swastika from the air.

The fountain has spouted happily for over 27 years, but now the mayor says he will replace it, fearing the town will otherwise be doomed. 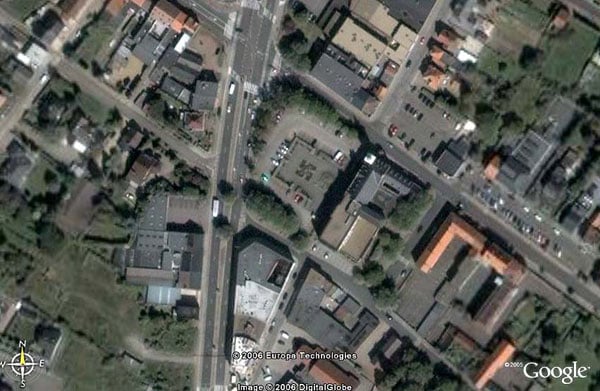 Seventy-two year old designer Robert Tachelet says he is "not a nazi, and I'm proud of the fountain. The Germans don't have the monopoly on the swastika, it is an ancient symbol of the Sun god".

He's right of course. In Europe by the early 20th century the swastika was widely used and regarded as a symbol of good luck and auspiciousness - it's just that its most enthusiasitic and best known proponents were the Nazis.

In 1979, when Tachelet presented his work to the previous Mayor, the resemblance of the swastika was not a issue. According to Belgian daily Het Laatste Nieuws (The Lastest News) the fountain will now take the shape of a shamrock.

The hunt for swastikas will most likely continue. Last year, a Swastika Junction was discovered in Florida, and Google Earth aficionados are still looking for a swastika house near Dublin which once belonged to the Germans.

Google Earth users can examine the evidence for themselves here. ®