Parallels Desktop (PD) is very definitely for folk who want to use another operating system on a casual basis. It's benefit of fast access to the guest OS is balanced by reduced performance and limited hardware support. It's not a tool to use if you're a gamer, say, but rather for dipping into that legacy accounting package you're still using after all these years.

That's not to demean PD - getting multiple operating system to operate alongside each other simultaneously remains an impressive technological feat, and Parallels' software is both ingenious and amazingly cheap. PD manages the trick of mediating between guest operating systems, Mac OS X and the hardware they're all running on. The host OS believes its operating alone; the guests each assume they're the only show in town; PD is the magician behind the curtain making it all work seamlessly.

Installation is remarkably straightforward - particularly in comparison with BootCamp. PD itself is installed in the usual Mac OS X manner. Running it invites you to set up a Virtual Machine - the ersatz PC on which any variety of Windows, of Linux or of a number of other operating systems will be fooled into thinking they own. There's no need to re-partition your hard drive - PD creates .hdd files and ties them into each VM as if they were physical, separate hard disks. 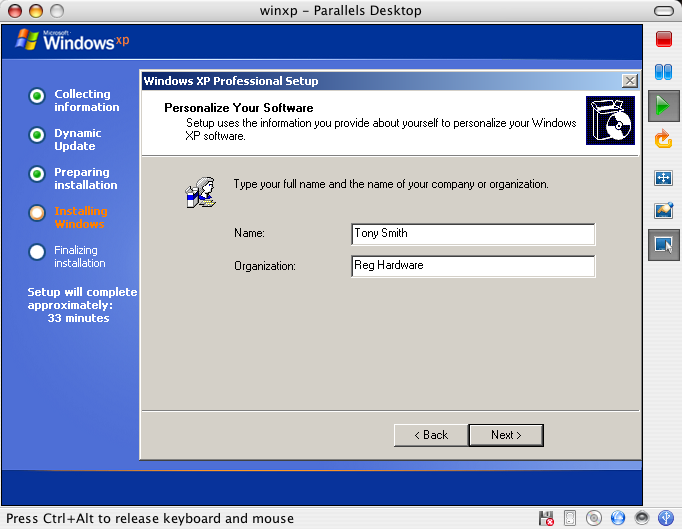 PD places the .hdd files in your own Library folder. You can move them, but you'll need to let PD know explicitly - it can't resolve aliases, for example. But even so, it's easy to move the .hdd file off onto an external drive if you don't have enough space on your main hard drive. PD ships with an integrated disk compression tool that runs in Windows to defragment the virtual hard drive, clean out unneeded temporary files and so on. Parallels also supplies a separate utility for creating and modifying hard drive and optical disc images.