We all want our homes to stand out from the crowd, and what better way to do so than by decorating your front garden with some interesting lawn ornaments?

Only, we're not talking garden gnomes, stone frogs, or even wishing wells. 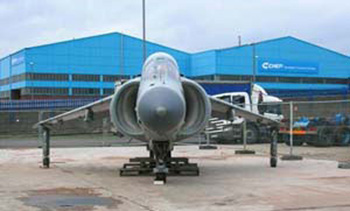 Nope. We're talking about the ultimate accessory for the house of the 21st century: a recently decommissioned Sea Harrier jump jet (probably) took part in the Falklands War.

Astonishingly, this plane (minus weaponry and engines) is for sale on eBay.

The firm that is selling the plane usually specialises in selling trucks. It got hold of the Harrier in a part exchange deal with the Royal Navy. The boys in blue got a Scania truck in return.

However, like many Christmas puppies, the plane turned out to be too big for the truck firm to keep, and marketing director Chris Kelly decided he'd flog it on eBay.

"A lot of unusual items have done rather well on eBay," he told us.

Although the bidding currently stands at over £200,000, Kelly doubts the plane has really done that well.

"I have no way of knowing right now which bids are serious," he says. "I doubt all of them are."

Keltruck will be dejunking the list in the next three days, before the auction closes, and only offers from preapproved bidders will stand.

The bidding history is certainly interesting reading. Some bidders have spent long periods of time bidding against themselves. One bidder raised the price by almost £30,000 in a furious, solo, bidding war.

Keltruck is also advertising the plane for sale in AutoTrader, The Sun reports, where the firm is asking for offers in the region of £20,000. ®