Third-party utility can do it now, apparently

Vodafone's 3G smart phone, the v1605, will not gain HSDPA support until Q1 2007, a company spokeswoman told Reg Hardware today. The ability to download data at speeds of up to 1.8Mbps will come through a "software update", she said. Alternatively, you can download an unofficial HSDPA enabler utility now. 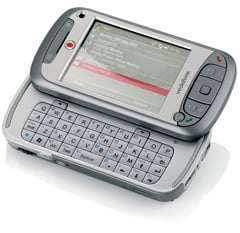 The carrier quietly launched the v1605 late last month. It's based on HTC's TyTN handset, as are product variants such at T-Mobile's MDA Vario II and Orange's SPV M3100. All these devices support HSDPA - network coverage permitting - but the v1605 doesn't, yet.

Vodafone has an HSDPA network - it's currently offering its Mobile Connect 3G Broadband Data Card add-in as a way for notebook users to connect to the network. Oddly, however, the v1605 won't access the HSDPA service.

The spokeswoman admitted the Vodafone-branded device is "HSDPA ready" - it's capable of using the higher speed service, but connection isn't currently enabled in the gadget's software. Vodafone didn't say why it was holding back the software update. 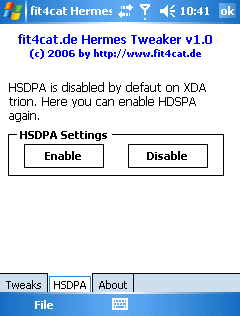 Can't wait? Then German software utility Fit4Cat Hermes Tweaker is all you need. According to the developer's website, the app allows V1605, M3100, TyTN and Vario II users to adjust rather a lot of system settings, including HDSPA connectivity.

We've not tried it, and we can't vouch for its claimed functionality, so proceed at your own risk. The download requires registration. ®