Municipal WiFi is the new hope for Net Neutrality - thinker

Municipal WiFi networks could help beat US carriers and politicians in the battle over so-called "net neutrality," according to one leading campaigner

Stanford University law professor Larry Lessig has argued the WiFi clouds popping up across cites from Philadelphia to San Francisco could provide broadband access over the "last mile" between the internet cloud and users' doorsteps.

Lessig, author and co-leader of the Creative Commons, told LinuxWorld attendees in San Francisco, that unification of the WiFI patchwork would provide an infrastructure that frees the last mile from the "proprietary control" of carriers like AT&T and Verizon. This would restrict carriers' ability to charge content providers different fees in order to prioritize delivery of their data packets across the internet. 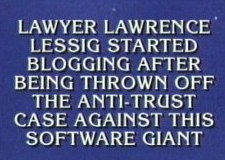 "When one owns the wires as these network operators do, there is a desire to leverage control. To exploit and capture the value up the stack," Lessig said.

"There's an explosion in municipal mesh networks... as you see the clouds exploding above the cities and people unify them, the last mile is solved. The last mile is provided free of proprietary control," Lessig said.

Wonderful clouds exploding imagery aside, the wireless networks aren't taking off with quite the speed that Lessig claims. Google only fired up its free WiFi service in Mountain View this week - close to a year after it first promised to establish the service. And, those hoping to use the service, have to sign onto their Google account, letting the ad broker at their traffic. Meanwhile, major cities have struggled to rollout networks and see their WiFi plans as multi-year efforts.

According to Lessig, the end to net neutrality would hurt start-ups lacking cash not the giants such as Google, who are in the cross hairs of carriers like AT&T. "The net neutrality looser will be the next Google - like YouTube - because they can't pay this toll to be on the network," Lessig said.

He invoked the spirit of Linux, suggesting WiFi networks could be unified and moderated by the community, a la the Linux kernel. "If you support peer to peer, penguin magic, you will erase the last barrier to guaranteeing this infrastructure of the internet maintains the values of freedom that were there at its birth," Lessig said.

Municipal WiFi has been under attack in the US. Carriers like Verizon have been successfully lobbying local and national politicians who have introduced a number of bills banning cities from providing free wireless services in recent years. Carries argue free WiFi is unfair competition and hurts innovation, points rejected by Lessig who said free WiFi is actually "good for business, good for growth and more valuable to society and the economy."

Lessig encouraged members of community to inform lawyers and politicians about the dangers posed to innovation and new companies by the end to net neutrality. This, he said, would necessitate becoming involved in politics. "You have to play politics in a way the other side plays it... you need to 'waste your time' because they have all the power that's necessary to take away the freedom you now celebrate," he said.®