Review It has taken the major handset makers some time to respond to the success of Research in Motion's BlackBerry. Having tried to convince buyers that what they really want is a regular handset that can also send and receiver email, phone makers like Nokia have just had to accept that there is a demand for devices with big screens and keyboards. Announced last year, the E61 has finally begun shipping as Nokia's answer to the near-ubiquitous RIM email tool...

The wedge-shaped E61's layout will be familiar to BlackBerry users but feels a wide affair if you're used to more traditionally styled phones and even if you've used a Palm Treo. The phone's face is dominated by a gorgeous 320 x 240, 16m-colour screen and the QWERTY keyboard. Between the two sit the joystick, dedicated menu and email buttons then the soft menu keys and, below them, the call make and break buttons. All the keys are kept apart and well-placed for two-hand and single-hand usage. It's a little weighty, perhaps, but not prohibitively so. 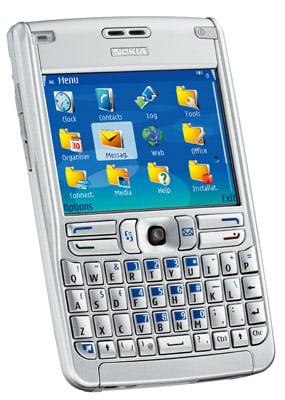 Above the screen sit the power key and the incoming email alert light, both symmetrically placed either side of the earpiece. The speaker grille is on the phone's left side, next to the volume control keys - alas, they're not Nokia's answer to the BlackBerry's jogdial - and a third key which activates the voice recorder.

The base of the handset is home to the infrared port - do people still use these? - and Nokia's Pop-Port connector. And that's it - the rest of the phone is entirely featureless. There's not even a camera on the back. Part of the back-panel slides off to expose the battery compartment, the SIM slot and the handset's memory card bay. The SIM slides in sideways and is held in place by the battery itself. The MiniSD card - there's a 64MB unit in the box - is hot swappable and could have been made accessible without having to remove the back-panel had the cover been sculpted with suitably sized hole. Presumably, Nokia believes E61 users aren't the kind to swap memory cards in and out on a frequent basis. Not that removing the back-panel is hard, and at least this way the card is kept safe from accidental removal and loss.

Starting up the E61 for the first time with a new SIM forces it to determine which network you're using and install appropriate data connection codes. Clearly, if you buy your E61 through a carrier, all this will have been done for you. The handset runs Nokia's Series 60 (S60) front-end to the Symbian OS - version 9.1 here - and you've the customary array of PIM and messaging applications. These are joined by Nokia's new browser and a set of office applications: Document, Sheet, Presentation and Screen Export, the latter used to control a plug-on projector connection module.

Nokia provides PC-based synchronisation tools, but I hooked the phone up to my MacBook Pro using Bluetooth and Apple's iSync software. Pairing the devices was straightforward, but with the current version of iSync pre-dating the arrival of the E61, I was forced to hack the application to allow it to recognise the new handset. This done - the information's available on the Mac OS X Hints website - I was able to add the E61 to iSync's list of maintained devices and copy over more than 300 contacts and a dozen or so calendar entries.