Canon has launched the follow-up to its hugely popular digital SLR camera, the EOS 350D, bumping the new model's image sensor up to ten megapixels and adding a dust-busting technology to its internal workings.

The EOS 400D also sports a bigger LCD viewfinder than in predecessor: it's 2.5in in size and has a 160° viewing angle. The auto-focus has been improved, and the 400D will take twice as many shots in burst mode as the 350D could: ten RAW-format frames to five. 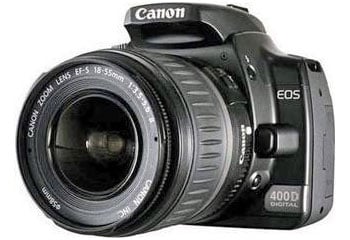